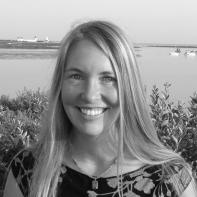 Rebecca Durham is a writer, botanist, and artist. She holds degrees from Colby College and Oregon State University. Originally hailing from New England, she now lives in western Montana with her daughter and two cats. Her writing has appeared in Orion and MPG Publications, among others. Her botanical art has been featured at the Montana Natural History Center. She is a MFA candidate in Creative Writing at the University of Montana.

The canyon is a stratum of time. Light layers of limestone rest on layers dark like rusted blood. At the rim, a misstep means falling to the beginning. Soft body on hard stone.

Against karmic gain I sometimes pray for his death. That man to once I was married. Until death do us part.

Away from crowds that stand on the edge and gape, we walk. Below the trail, my daughter E and I step between juniper and pinyon pine, past agave and yucca, and rest. As day nears night, shadows collect along the canyon crevices and erase red. Blue pools of darkness drape edges.

Wind in the junipers. Bouteloua, eyebrow grass, pulsing with light.

At the base of the canyon the Colorado River flows sinuous and cold. Thick caramel laps at the edge of the oldest rocks. Vishnu Basement Rocks, 1,840,000,000 years old. Heat and pressure morphed the rock and molten granite filled any emptiness between. Dark and irregular, these rocks slant sideways, arc up towards the sun.

In Hinduism, Vishnu, whose name means "All-Pervading," is the protector of the world and the restorer of moral order (dharma). He is peaceful, merciful, and compassionate. [1]

Ankle tattoo. The defining feature he listed on the protective order when he filed with the court that I was dangerous to E. Three weeks to negate his lies so she could come home. For three weeks breath clotted in my throat. I discovered he would stop at nothing to hurt me, even if it hurt E. The iron in my blood became so heavy I nearly drowned.

At the south rim looking north. Nothing man made can be seen, just a flat expanse of trees across the chasm, and intricacies carved by erosive time. E fills out her junior ranger book in pencil. Animal Seen: falcon; Where: Rim Trail, in the air; Behavior: flying.

The south rim sits at 7400 feet and the river flows at 2400 feet above sea level. The mile that separates the two creates a complete change of flora and fauna.

Thirteen years ago I met him, for seven years we were married, and for three years we’ve been divorced. Eleven more years of sending her back to him, as if he wasn’t capable of crushing her.

Run like hell my dear / From anyone likely / To put a sharp knife / Into the sacred, tender vision / Of your beautiful heart. [2] Yes Hafiz, but my feet are stone mired. Every day I dance with daggers.

To name things gives them intimacy. A plant becomes a grass becomes Bouteloua gracilis. I recognize its graceful curved seedhead, fringed like eyebrows. It fills the ground between these shrubs and trees, drought tolerant and tough. I say its name, bouteloua, turn it over on my tongue.

As soon as we stopped sharing a roof, I took back my name. I was careful how I referred to him after that. I never called him my ex-husband. There was more husband in that term than I cared for. E’s dad, the other party: these are names I settled on. In my phone he is The thop (the other party). It summons just the right feeling for me, yet is benign enough for E to see. It feels like a defecation to say it. Shake off a little more dukkha.

The word dukkha can mean either physical or mental suffering, or the suffering which is inherent in change and comparison, and also the suffering caused by our clinging to things which are impermanent. [3]

What weight will I bear?

Redwall Limestone was deposited in a shallow ocean approximately 340 m.y.a, yet it is only one of many sedimentary rock layers deposited in, along, or near a coastline that moved across what is now northern Arizona for about 250 million years, when this area was free of major geologic upheavals. [4]

Through the years I’ve explored various coping strategies to keep balanced and happy against the onslaught of negativity and aggression. For a while I was picturing a hornet flying around my head. I have a buffer of safety around me. It is not advisable to swat and spit. Instead I must dodge and sway, like a great blue heron hunting, only I hunt for freedom.

Once a disturbance has been taken place, it may take time for the balance, the harmony, to be achieved in the outer circumstance. We may even have to wait for act three or even later (here for the moment considering acts as successive incarnations) before the event in act one finds its outworking. As personalities we experience time sequentially. But to the Self, the concepts of time and space must be irrelevant. “When” the impulse from the Self comes into our lives, then, it seems from our point of view to come in time and space. But what we experience as adjustment in the personality is part of the archetypal “plot,” which is already perfect, whole, at the causal level; it never has been anything but perfect and whole. [5]

The top of my forehead holds a scar from his fist and car keys. A tiny zigzag of skin two years old. A little whiter than the rest of my skin, which is thirty-nine years old. I see it as a daily reminder, not of his hatred, but of my strength.

Even here, though / something can bloom; on a silent cliff-edge / an unknowing plant blooms, singing, into the air. / But the one who knows? Ah, he began to know / and is quiet now, exposed on the cliffs of the heart. [6]

Most of the sedimentary rocks are rich with fossilized life. Ocean bivalves, corals, dragonflies wings, reptile tracks, leaves. The stone speaks of lives a million years ago. Life without man.

Normally, sedimentary rock units are assigned numeric ages based on the presence of index fossils, worldwide correlation, and the geologic time scale. Unfortunately, the Precambrian Grand Canyon Supergroup Rocks are so ancient that they formed before life diversified and developed hard parts. [7]

The moment that he scarred my body I was holding E. Blood ran down my face. What does she remember of that time?

Unconformities represent missing time periods. It is impossible to completely reconstruct what happened during that time period. For example, where the Tapeats Sandstone overlies the Vishnu Basement Rocks, clearly, at a minimum, a great deal of erosion had to happen after the formation of the basement rocks deep in the earth’s crust to expose them on the surface prior to the deposition of the Tapeats Sandstone. Gravel made up of cobbles of eroded Vishnu Basement Rocks may be present at the surface of the unconformity. [7]

After a recent entanglement I asked my mom, How did this happen? How could I have married him? She replied, Because these parts of him that you see all the time now weren’t his dominant mode. He was showing you his nice side, and that side slowly faded over time. Yes. Still, it’s hard not to feel the weight of fault. Shouldn’t I have known better?

Exposed in the walls of the Grand Canyon, are numerous faults that document the region’s earthquake – or tectonic – history. Faults are seen cutting through practically every geologic layer in the canyon, from the oldest, two-billion-year-old Precambrian rocks through some of the most recent lava flows less than 10,000 years old. [8]

We stop to look at cacti and E and I walk near piles of rocks. I tell her, Be careful, there could be rattlesnakes. She becomes immobilized with fear and sobs, I hate snakes, I’m afraid of snakes. What is my obligation to warn her? Won’t she know how to act when faced with venom?

Here he is over a thousand miles away, but distance isn’t protective. I get an email with his scathing words and a new petition for the court. I put it aside, work on tidying it into a cave I store his darkness, far from my heart. There is nothing you can throw at me that I cannot metabolize. [9]

The night before E and I went to a park program about stars. The ranger had a laser pointer that seemed to penetrate the atmosphere, and he couldn’t point it towards the planes or it would blind the pilots. He pointed between the summer triangle, a constellation I know well from nights sleeping in the desert and watching the stars wheel around. If you ever feel like you don’t know where you are going in life, he said pointing, go outside and look right here. All of us, everything in our galaxy, are all going toward here, eventually. But we won’t ever get there, because we will crash into a galaxy along the way.

Years before he became a persistent presence in my life, before E was born, my friend H and I hiked to the bottom of the canyon and back up in one day. Taking the South Kaibab trail, we descended 4860 feet in 6.3 miles to the river, 1.7 miles along the Colorado River, and then up the Bright Angel trail for 7.8 miles climbing 4460 feet. We walked through half of earth’s history, running our fingers along its red and brown body. Under a cottonwood tree we stopped midway, delirious from exertion and wilderness. The tree was shedding its cotton, sending seeds into gravity’s unpredictable fold. We lay on our backs in silence and awe, and watched the cloud seeds catch wind and drift, flanked by sky and stone.

I could sit here forever looking out over this great expanse. E gets restless and we rise to keep walking. Before we go I make her sit with me in silence for ten minutes. She counts it silently to herself. The rule is if she asks if it’s time yet, the clock starts over again.

2. Hafiz “We have not come to take prisoners” http://www.abuddhistlibrary.com/Buddhism/F-%20Miscellaneous/Miscellaneous%20Buddhism/Essays/Articles%20by%20various%20teachers/My%20Favorite%20Hafiz.pdf Accessed 10/13/15

6. Rilke, Rainer Maria “Exposed On The Cliffs Of The Heart” http://www.poemhunter.com/poem/exposed-on-the-cliffs-of-the-heart/ Accessed 10/13/15

‹ "Motel Childhood," by Megan Harlan up "Tobacco and Grace," by Shawna Ervin ›