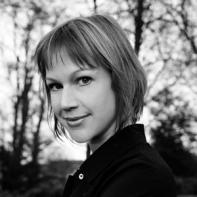 Claire Polders is a Dutch author of four novels. She holds a double master's degree in Literature and Philosophy and has studied at the Sorbonne in Paris. Her short prose in English has appeared or is forthcoming in Tin House (Flash Fidelity), SmokeLong Quarterly, Hobart, Word Riot, Folio, matchbook, Flash: The International Short-Short Story Magazine, Atticus Review, Literary Orphans, Litro, and elsewhere. Recently, she completed her first novel in English. She lives in Paris with her American husband who is also a writer.

Imagine a woman in a shuttered room, serving afternoon tea. She’s playing the host to five pale women who have barged into her life, she thinks, to size it up. The air hangs heavy, thick with the unsaid, and the eyes of her visitors rove—how shabby the shack, how poor the cups.

Imagine these women in a semi-circle, chests inflated, knees together, hands waving bamboo fans to chase the heat.

The host is Veerle Maria Oosterweg, my grandmother before she became my father’s mother, twenty-two-years old. She’s younger and yet more mature than I am now; she knows what it is to be hungry.

See her sitting there, in her feathery gray frock, once white and unwrinkled. Like a swan faraway from the nest? No, she’s at home in the tropics. Her neck and ankles are bare.

It’s 1946, eight months after the bombing of Hiroshima. The war on Java is officially over, although in reality it is not: four hundred years of colonization is coming to an end. A barbaric end, the guests call it, an apocalypse. Outside, distant cries resound, sticks batter street lamps, feet are splashing through mud—how savage. The island is running amok.

My grandmother’s head starts spinning. She has closed the shutters to keep out the rain, the insects, the world. Regretting it now. Even breathing is strenuous like pushing stones with her lungs. For the first time, she longs to be anywhere but in this room.

“Veerle, please, why are you here, in this neighborhood?” asks one of the guests. “Do you live here… alone?”

And so they begin, her jury of peers, bringing down the bars. Imagine them gloating in moral rage, stewing in hypocrisy. Sweat beading above their eyes.

“You can trust us,” says another. “We used to be friends, remember?”

My grandmother’s spine flexes, as straight as the back of her chair. Spoons tinkle against chipped china. What you love is never safe.

On the porch outside crouches a man, only half-dressed. He watches the scene through a gap in the shutters. Is anyone aware of this young man’s presence, of the dagger in his hand? You tell me.

My grandmother listens to the thrum of rain against the thatched roof, the water swashing and gurgling in rivulets from the steps. Every afternoon, the sky bursts, yet today it’s a deluge. Punishing. She can hear the difference: there’s anger in the gush.

In the pit of her stomach a fire ignites. Its flames shoot the blood to her head. She summons her strength, expands her lungs, but can’t will the shame away. The blush only deepens and slinks down her throat, scorching her breasts.

She cradles her scalp. Imagine this gesture peacefully at first, self-consoling, until her hands jerk, yanking at her hair, pulling it out by the roots. From her mouth escapes . . . no, not an animal growl, frogs may chatter in the yard but we’re not in the jungle . . . what escapes, according to the man on the porch, is merely a gasp.

Once the guests are gone, he comes back inside, this young man, the witness, who first introduced himself to me about a year ago. He was an old man by then and charming. Imagine him kneeling beside my grandmother, still young, and kissing her knuckles. In each of her hands, a fistful of locks. He gently relaxes her grip to release the golden strands and wind them around his fingers.

For half a century, it was all he kept of her, in a silver locket worn around his neck. It was all he entrusted to me along with their story before he followed her into the grave.