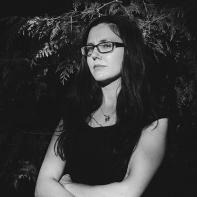 Elissa Washuta is a member of the Cowlitz Indian Tribe and the author of two books, Starvation Mode and My Body Is a Book of Rules, named a finalist for the Washington State Book Award. Her work has appeared in Salon, The Chronicle of Higher Education, BuzzFeed, and elsewhere. Elissa holds an MFA from The University of Washington and currently serves as the undergraduate adviser for the Department of American Indian Studies at the University of Washington and a nonfiction faculty member in the MFA program at the Institute of American Indian Arts. She is Saturday editor for The Rumpus.

A Conversation with Elissa Washuta

Caleb Powell, co-author with David Shields of I Think You're Totally Wrong: A Quarrel (Knopf), now a film starring Powell and Shields and directed by and co-starring James Franco, conducted this interview with Elissa Washuta. Of her work he said:

In Elissa Washuta’s “Faster than Your Heart Can Beat,” an essay from My Body Is a Book of Rules, she positions twenty-four dysfunctional experiences in reverse chronological order and concludes:

“Still, every time, I say no, you say yes, and to you, it is nothing but a difference of opinion.”

This difference of opinion concerns what is rape; provocative moments like these fill her memoir-of-essays, combining aesthetics and substance to navigate difficult terrain. Her narratives juxtapose mental health, coming-of-age, Native American identity, and Catholic upbringing in the context of sexual assault. My Body earned finalist recognition for the Washington State Book Award in nonfiction, eventually won by Charles D’ambrosio’s Loitering.

Washuta, a member of the Cowlitz Indian Tribe and a teacher of writing at the American Institute of Indian Art (IAIA), lives near my home in the Pacific Northwest. We met at local bookshops and coffee shops; the following conversation the result:

Caleb Powell: You cite Maggie Nelson’s, book, The Argonauts, as influential. How so?

Elissa Washuta: There’s a passage where Nelson reflects on Alice Munro’s short story “Wild Swans.” Nelson writes, “Munro lays it all out: how the force of one’s adolescent curiosity and incipient lust often must war with the need to protect oneself from disgusting and wicked violators, how pleasure can coexist with awful degradation without meaning the degradation was justified or a species of wish fulfillment; how it feels to be both accomplice and victim; and how such ambivalence can live on in an adult sexual life.”

Besides admiring her prose, I really identify because I was trying to show that my first experience was complicated. After I was raped I continued seeing the perpetrator. I was terrified and repulsed, and I constructed a story as a response to rape. There wasn’t pleasure, but there was self-delusion that created a deep ambivalence.

In My Body, I constructed a narrator with a complicated relationship with violation and the consensual actions that followed, the tension between desire (to have had it happen differently) and reality (that I never had sex before I was raped).

CP: What are your thoughts on Emma Sulkowicz, the woman who carried her mattress around campus at Columbia as performance art and protest? She also continued to see her rapist.

EW: I know Emma Sulkowicz’s protest brought attention, and I admire that. A few years ago, I limited my reading of news on rape, especially on campus. When I was in college people weren’t talking about it the way they are now. I thought my experience was incredibly unusual because of the silence. Colleges are being scrutinized for their handling of sexual assault cases, and we’re hearing from students who feel that their colleges have failed them. In college my outcry was dismissed by the person who answered my help line call. If the conversations that are happening now were happening then, I might have realized that I had a way to seek justice, and I might have begun healing sooner.

CP: In “Preliminary Bibliography,” you wrote, “There is a strange prestige associated with calling oneself a rape victim.”

EW: Many people believe there are rapes that are real and rapes that don’t count. It’s damaging to be told that your experience doesn’t count. When I was younger, my understanding of rape was developed by TV. The man who answered my campus line said my rape wasn’t legitimate because I wasn’t “beaten up.” I told a friend, and she didn’t think I had been raped.

Things have changed. I was raped in 2005, and I had been influenced by Law & Order. If I hit all the items on the rape victim checklist, if I had a clear-cut experience worthy of Law & Order, then I would have felt worthy. I thought that in order to not be an accomplice I would have to risk my life. Part of that was my Catholic school education. We learned about martyrs who had given their lives to remain virgins.

I read about rape a lot. Now, I’ve stopped, mainly because I’ve read so many. I’m not averse to reading about rape, and I still like watching Law & Order, but I’d rather do it after work, when I don’t have to see anyone until the next day. I’ve begun giving trigger warnings before my public readings, by the way. I know what it’s like to lose my shit in public over exposure to such narratives.

CP: This leads to your Law & Order essay.

EW: Yes. I’ve been on two juries and wasn’t selected for a third (possibly because when the prosecuting attorney asked the jury pool who watched Law & Order, I was the only one to raise my hand). The show actually feels more real to me than the courtroom.

Writing that chapter/essay I watched every episode in the first seven seasons, took notes, lines, and during this period I was sexually assaulted a second time. My wounds were raw. I reacted to the discrepancies I saw between my experience. I built my own narrative (on the right side of the page) to parallel the movement of the Law & Order episode, and pieced together show quotes (left side).

CP: It’s a great essay. Do you consider yourself a survivor or victim?

EW: Those words are so charged with meaning that has little to do with my individual experience of rape. I’m a person who has been raped—I’ve had the experience, and the experience changed me.

CP: You chose to write this as nonfiction rather than fiction. Why?

EW: Lauren Slater, in Lying, writes, “Everyone knows that a lot of memoirs have made-up scenes; it’s obvious. And everyone knows that half the time at least fictions contain literal autobiographical truths. So how do we decide what’s what, and does it even matter?”

When I started My Body I was twenty-two and put in everything. I didn’t care who was going to read it. I didn’t conceal, of course I left things out, but that’s because only a small sliver of life can be represented. As far as factuality, the events that happened are as I remember. There’s a degree of invention. The book ends at age twenty-four, and a lot has happened since. I’m thirty-one.

EW: I think that loneliness is what I meant by being the “first” person to be Elissa. Even if someone told me it had happened to someone else, that didn’t lessen my pain. Eventually, reading other accounts, other real experiences, that did help.

CP: I have daughters. How to teach our children about consent and rape?

EW: It’s a tough question. I think about having kids. I don’t know what could have been said to me to help. I look back at the sex-ed book my mother gave me; it had a lot of great language about self-respect and relationships. But, in the end, it didn’t keep me from being raped. But I was raised by incredible parents who did everything they could to keep me safe, and their love couldn’t keep me from running into men who enjoyed cruelty and ugly power.

CP: Your book also is about your mental health. How so?

EW: I started medication a year and a half after the rape. I only knew that I was having dramatic, scary moods. I was experiencing panic attacks because of the rape, and the mood instability was probably a result of the heavy drinking I veered into after the rape. To my doctor, this looked like a mood disorder. I was diagnosed as bipolar.

EW: Twenty-one. That’s when I started taking medication. But it’s hard to see what the brain is doing, and what it needs, when it’s under the influence of that much alcohol, and the lows that have always followed drinking for me. And I was drinking a lot. What seemed like bipolar episodes, you know, maybe weren’t. Now the diagnosis is in the process of being changed, from bipolar disorder to PTSD.

CP: What are you doing next?

EW: After My Body I wrote Starvation Mode, a short memoir of the troubled relationship I’ve had with food since childhood. I haven’t moved away from writing about rape and I have no plans to stop, but right now I’m working on a book about the ways that non-Indian representations of Native people affect my culture.

CP: What is the importance of Native Identity?

EW: It's something that always has, and always will be, fixed. I have always been Cowlitz and Cascade, from people who have lived on this continent for thousands of years. Although each Native community is different from one another, we share some things. The ongoing colonization of Native people and its role in making me who I am is the conflict at the heart of my next book.