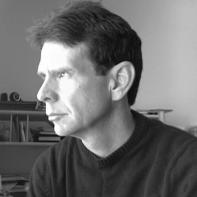 After kicking around the West for a while (with stops in Spokane, Flagstaff, and Sedona), Stephen Cloud has settled in Albuquerque, where he's fixing up an old adobe, working on poems, and pondering the official New Mexico state question: "Red or green?" Recent publications include work in Valparaiso Poetry Review, High Desert Journal, New Madrid, Shenandoah, and Tar River Poetry.

Come down, come down—down to the dens, a riverine slum where courier kids kick at bones. Let the smell guide you to a stilted hut, clacking abacus, tar­stained fingers flipping through yellow banknotes, pipes laid out on a tray. Incense pours from joss sticks, an ontological haze, the warping of time. Deep breathing means the danger of memory: burning huts, body bags, white phosphorus descending in clouds, the chaplain reciting psalms. White noise, white noise. The night lights of the tourist district spinning out of control. What has happened to the heart? Let’s make a mockery of existential dread, puncture wounds tracking veins. In the parallel world, a house rat has chewed the farang’s shoe and left a fist­sized hole. A delusion? But you are wide­-awake, alert, speeding through spacetime. You can see for yourself the elegant solution: you are like the inexplicable dark matter between the stars.

After the Aussies fobbed off the phony opium, I went down to the river and found the floating market in an uproar. The blind woman at the coconut cart winked when I passed, a bad omen—evil eye—the old necromancer of the wharves might have warned if only I had sought his advice this time. No such luck: I listened instead to the Aussies. Easy money, they told me. A simple hustle. Child’s play. Later, I would realize the fun they’d had at my expense. Yes, I played the dupe. Didn’t see it coming, a ruse as plain as moonlight rippling on delta waters. Meanwhile, at the Lucky Farang Hotel the Aussies howled over Mekong Whiskey and smacked their glasses on the zinc bar. It was too damn funny for words, they said. A hard lesson to be sure, considering I had only wanted to keep the river flowing through my veins and the starlight revolving overhead. But that’s the way this business goes: from day one on, it’s no luck but hard luck for the poor in spirit, the impure of heart.