A Poem by Clare Paniccia 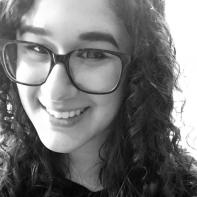 Born and raised in upstate New York, Clare is currently a first-year PhD student in poetry at Oklahoma State University. In 2015 she was a finalist for both the Janet McCabe and Slippery Elm poetry prizes. Her chapbook manuscript, Threaded Daughter/Threaded Child, was a finalist for the 2016 Wells Press Chapbook Contest, and her work has been published in or is forthcoming from Radar Poetry, Puerto del Sol, Best New Poets 2015, and elsewhere.

In Pulaski County a dogfish was found caught on the slipway,
its body soft under weight of cartilage, sleekness dried in sun.
There was a guess for cause, for death to be reasoned in

the rational—That the Ohio River had flooded, abandoned
saltwater carcasses to cement. To birch roots that grasped
for the living. But even then, how did the waters change?

Gills submerged from saline to cool freshness, the curve
of confluence, the angle of fin to the fisher’s knife.
I read the story online, glossed over details to stare

at the open mouth. To justify, in some way, the need
for escape. But my eyes kept on the word caught,
as if the weight of catching can be rendered

in what is stolen away from native ground. The taking of bones.
The repositioning of limb. The way we catch bouquets, catch
lovers, become the catch of the day riding shotgun in a

hatchback across Indiana. What can the miles do other
than displace our intent to strike down into earth—
I thought that the air in Missouri could have swallowed

me up if it wanted, wet with bugs and silt.
So different from Adirondack dampness—
The kind that sticks to stone, sweats out lichen

into graphite, garnet, and zinc, the kind
that rolled us into the Midwest like a pair of moon-faced
lovers fresh out of brine, the East coast hanging from

our teeth like seaweed. Come here, you said before
the dredging, the scoop of mud from the navel:
This is us now. Us, us. Wrapped in cicada shells,

in hawk’s scream—What small thing
has been buried here, curled in its own sinew,
in talon. Broken out of skin. Oh nearshore darling,

who has hollowed you? I know fishermen cut
the spines to avoid venom, cleaved defense
from collagen. The body lanky in its emptiness, tangled

against consequence. As in caught, as in seized, as in
the movement of flesh between hands, the movement
of blood through water. What expels us from our

origins if not our misconception of the ground?
That dirt will absorb muscle the same way in any space.
I turned away from it then, those eyes already translucent,

the torso supine, knowing that somewhere
out of frame the onlookers must have wondered
who participated in the taking. Wondered where

they could begin to lay blame.