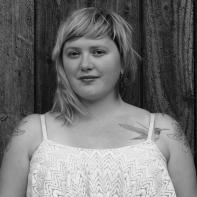 Luiza Flynn-Goodlett is the author of the chapbook Congress of Mud (Finishing Line Press). She received her MFA from The New School and was awarded the Andrea Klein Willison Prize for Poetry upon graduation from Sarah Lawrence College. Her work has appeared or is forthcoming in numerous literary journals, including ZYZZYVA, New Ohio Review, The Missouri Review Online, and The Greensboro Review.

Lightning kindles a bird nest,
tosses it into the undergrowth.

Stoked by oxygen, the blaze
licks the canyon's cracked lip.

This racket recalls its opposite—
rapids when a levee splinters.

To survive, spark a secondary
fire, then press chest to ash.

Flames part at the scorched
patch and stampede uphill

to fell eucalyptus and rotten
redwoods, as you cauterized

an entire coast, skyscrapers
splayed under char like nurse

logs. So issue as a mushroom
from humus, pearl gargled of

grit—fist that bruised a cinder,
skin you wore a spent match.

We weren't yet homely—no one had noted

if baby fat melted off or took up residence,

whether we'd grown into our noses. Calves,

regardless of shapeliness, propelled us into

to cling like a damp suit we had to claw off.

Then, we learned to favor the deck chair

into our backs. And forgot the deep end—

how we'd hold our breath and float above

the drain, gaze up at the distorted world.

It shimmies along strands of DNA,

chokes us generations after cattle

cars and numbers tattooed on an arm.

Our skin bulges with nights a child

was placed on a lap, kissed too hard

on the mouth. Each pill in a daughter's

palm is one backhand her mother didn't

the aunt raped in her livery cab, a noose

atmosphere, exhales the next sentence,

makes manifest what we already knew.

‹ A Poem by Lucinda Roy up A Poem by Marcela Sulak ›