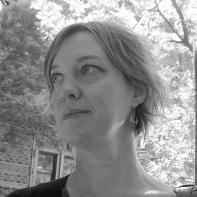 Jane Satterfield has received awards in poetry from the NEA, Bellingham Review, Ledbury Poetry Festival, Mslexia, and more. Her books of poetry are Her Familiars, Assignation at Vanishing Point, Shepherdess with an Automatic, and Apocalypse Mix, winner of the 2016 Autumn House Poetry Prize selected by David St. John. Recent nonfiction is out or forthcoming in Hotel Amerika, Superstition Review, Animal: A Beast of a Literary Magazine, and Diagram. She is married to poet Ned Balbo and lives in Baltimore where she is an associate professor at Loyola University Maryland.

Language yokes my grandmother Julia to a place, though the ground she stands on is not strictly her own.

The story that’s severed her from her family’s homeland, Hungary, will not be unfamiliar: a father, Janos, who appears on the manifest of alien passengers on the S.S. Vaderland arriving from Antwerp at Ellis Island, September, 1903. Janos, who escapes the Index of Fatalities in West Virginia Coal Mines where the spelling of names is frequently phonetic and the format of reports varies from time to time (reports were scattered, compliance with suggested practice erratic) so that, while reading, you might discover that among the perished in a collapsed mine shaft was “Italian #14.”

The dirt in my own backyard bears traces of silt; in drought seasons, throws up a glint of shine from glittery scales of mica, at once familiar and strange.

There were more mining accidents on Monday than any other day of the week. Janos is a man whose good luck lasts so he can send for his wife, Juliana, and their son Josef. Whose good luck means the couple will live out their days on a small swatch of farmland outside Huntington, West Virginia.

When Juliana debarks the Carpathia at the end of June in 1910, she’ll queue up, thread through the Great Hall in the line to which she’s been assigned. Her last place of residence will be listed as “… Hungary.” Two years later, she will bear Janos their only daughter: Julia, my father’s mother, born in America.

But Juliana will never master English—had not, it appears, found it useful. Instead, she clutched a handful of words to be deployed only in transit between the States and her home village.

Her stubbornness kept the soil of her homeland alive on her tongue.

The vagaries of family history run deep, spilling into broader currents. These days we say complicated, which means everything and nothing at all. A gust of hot air, a chilled wind. A shift in weather, a landscape riven with riddles. A shrug of the shoulder, a convenient term. But none of these account for the complexity of a people who appear to be either cavalier with facts or hiding the truth, citizens of the countries don’t remember, can’t tell.

There are ethnic minorities in many European countries. Though a man’s name indicates he’s Hungarian, how can I be sure, in the absence of records, how far back that heritage goes?

As a young child, my father begged his mother to teach him Hungarian. Furious, Julia refused—her accent was American, and she’d worked hard to conceal the speech she’d shared with her immigrant mother. But in her later years, periodically ill and compromised, my grandmother would sometimes, John reported, speak what others thought was “gibberish”: the mother tongue he’d never learned.

What minefields of memory did she walk in those moments, the borderland between time and languages, between haza and home, suddenly insubstantial as air?

“The history of central Europe,” Hungarian-born English poet George Szirtes writes, “is a matter of continual burying and disinterring. Sometimes it is the hatchet that is being buried but everyone knows where the hatchet is and is not above using it.” Digging itself becomes part of the problem.

I am sure my great-grandfather Janos owned a hatchet; it was not a metaphor and came in handy on American soil.

The questions I waited too long to ask explode and drift like downy seeds across an open plain. Who do I summon when time’s current flows in a different direction and another language spills off my tongue?

Of her brother, nearly twenty years older, Julia remembered mostly how Josef would retreat to play the violin, an old school instrument handed down from some uncle. What sound scrolled from the play of his fingers, the dance of the bow over strings—folk music? Traditional ballads? A few Gypsy songs? His nephew—my father John—sifts childhood memories, scrolls Internet ancestry sites for clues, scans copies of passenger manifests and census reports. Answers sometimes appear, promising as trail heads that catch the eye, leading on only to give out. Underbrush obscures the spaces where travelers once walked.

Julia lived long enough for my own daughter to know her. Cat remembers my grandmother’s faint smile, her small hands held by Julia’s firm grip—the deep blue veins against translucent skin, hands as knotted and gentle as any fragment of lace.

Narratives are shaped by collusion and betrayal, revision and erasure. In my childhood, they arrived secondhand, a liminal text—stories my father reported, fragments offered up out of the blue, remarks my parents shared when we moved between dinner courses or rooms. Unseen relatives floated like line-sketched drawings in fairy tales, denizens of vanished lands who left few tangibles in their wake: Juliana’s Russian Orthodox Bible, Janos’ long-stem bent pipe, the tea towel sewn from an old flour sack that I used to wrap oven-fresh scones until it fell into shreds.

During her final illness, when my grandmother sometimes spoke Hungarian, my father had no language to purchase her passage back to the room. To the request he’d made years before, Julia had replied, “No need.” Which he later discovered is the literal translation of the Hungarian nem kell, the word closest to our English “no.”

Countries are rolled over by one empire or the next, boundaries shift and stretch, towns and people vanish or are simply lost in translation.

Where are the red, blue, orange flags—trail markers that point the way?