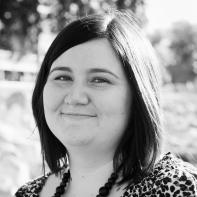 Sarah Carson was born and raised in Michigan but now lives in Chicago. She is the author of three chapbooks and two full-length collections of poetry: Poems in which You Die (BatCat Press) and Buick City (Mayapple Press).

The first gun we knew lay on a coffee table like a toolbox for the apocalypse: hammer, barrel, crushed beer can, pack of Newports, a ballpoint pen someone took apart. Mom said, “Don’t touch,” and we didn’t – because all that could come next seemed obvious: the blue lights in the windows of all the houses already turned out for the night, boys sneaking out a dark doorway, their pockets clenched in their fists. Brother says he overheard how it all started: how next to the TV remotes, the box of tissues, the pistol, formed from nothing, was a picture of one boy grabbing at another’s t-shirt, of boys kicked out of the metal shop, of that winter night we huddled in the library doorway while boys argued in the gas station parking lot, and the sounds that came next were like a fire spreading up a staircase, were the sounds the train made in the junkyard when a stray two-by-four stopped everything in the middle of the night. The first gun had been afraid of nothing – not daylight, not trouble – and brother palmed it like he was pulling a card from a stack of twenty; the way neighborhood boys dare each other to hold a basketball in mid-air. When one boy jumped another, opened his temple onto the concrete, onto the grass the parks department planted during summer, where earlier in the afternoon two boys had shot rock, shot scissors, the snow began melting, the grass started greening. Soon there were spiderweb cracks in the Laundromat window, holes just big enough to fit our fingers. There were stray shells that needed to be picked from the grass before Verto showed up with the lawnmower. “Don’t touch,” I told the kids riding their big wheels in nothing but diapers and sunglasses, kids with whole collections of shells in shoeboxes and paper bags and milk cartons. “Don’t touch,” I told the dog, his muzzle a divining rod, his body a strung bow.

Daddy Gets Arrested in Elizabethtown, Kentucky in 1966

He says he and his buddies left the base with just 20 bucks between them, enough for just 2 Colts each – not a game of pool, not a round on the jukebox – not enough to pay for the drinks of the girls who saw them first, crossed the street to ask them for cigarettes, not the other way around. Daddy says in Elizabethtown, Kentucky folks knew a Buick City accent by its boney vowels and its hard g’s, nevermind that Daddy’s Daddy came from Missouri by way of the dust bowl. Daddy says sometimes some people don't so much need to know something as to not know it, as in, “I don't know you, and I don't know your buddy,” as in, “All y’all definitely don't know her, and all y’all definitely don’t know me.” So late that night – after the fight, of course, after the Colt wore off, after nobody requested medical attention, after the country lawyer with the crooked jaw showed up to talk AWOL and Uncle Hollis said, “Brother, maybe there a lesson to be learned from this,” refused to wire bail from up north, refused to make a loan of it just this once, just this one fucking time — Daddy decided ain't nobody going back to Elizabethtown, Kentucky when the war is over, when the war ain’t over – not for fun and not for business. Daddy decided when his buddy’s momma offered to pay the fines, he’d take it; he’d offer to pay it back, and when the buddy insisted it wasn’t necessary, he’d pay it back anyway. When Daddy married his first wife, his second, neither would be from south of Genesee County, from south of where the river crosses Flushing Road. He told my sister and me not to even bother with a boy who didn’t know his way back from the lake to the reservoir, from the factory to the White Horse, and we didn’t (mostly). Mostly we’ve stuck to home, stuck to things that feel like home, things that sound like they could be familiar. Mostly we’ve not asked for anything from anybody, not taken help when it was offered. Mostly no one’s been to Elizabethtown, Kentucky since.

In Kalingalinga, Sister Joyce Asks Me about My Tribe Then Grabs My Breast

I say, oh, sister, you wouldn't believe me if I told you, if I, say, started with my own daddy, son of car, son of assembly line, or with Father Abraham, seven stories above the city on a cell phone, pointing after empty spaces where someday a buffet restaurant would be. Sister Joyce, the melting pot is locked door, a fenced yard; the skies all raised pole, FM static, chem trail, cockpit terror drill, repeat. I am so much foam and fabric my husband does not know my flesh from a couch cushion, and I prefer it like this. I'd explain but it'd be all Mr. McFeeley, up the Agrocrag, little Justin Timberlake, Macarana, Macarana, medium sized Justin Timberlake, mom throwing a rack of newspapers across a convenience store for refusing to let her daughters pee.  Like what's a tribe anyway: a lineage or an ellipsis? Like is it my brothers, a bean pole and a bullet casing, or is it the time I told my whole eighth grade class I was an orphan while Marshall Milbrath drew swastikas into the pinewood veneer of his desk? Sister Joyce, I'll take you to America, but first tell me your five point plan for getting used to all of the fake cheese and assholes -- because I promise you there are so. many. assholes. So many in fact it is dangerous the way we never strap a baby to our back to go check on our neighbors. It is dangerous the way we’ve gotten so used to keeping our hands to ourselves.