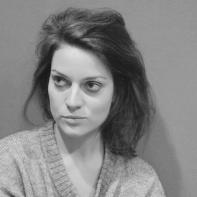 Most recently a finalist for the 2016 University of Wisconsin Press's Brittingham and Pollack Book Prizes, Melissa Cundieff-­Pexa received an MFA from Vanderbilt. Her poems appear or are forthcoming in journals such as The Adroit Journal, Linebreak, Mid-American, Tupelo Quarterly, Bat City, Phantom Limb, Iron Horse Literary Review, Diagram, among others. The recipient of an Academy of American Poets Prize, she’s the author of a chapbook, Futures with Your Ghost. Currently a PhD student at Oklahoma State University, she lives in Stillwater, OK with her family.

After I incised it, I offered up
to the bad wolf a vagary: pale kid,

(a window)… living ghost to my edges.
Conjure only this much of being nine:

her lungs on ice. But sometimes it all comes back.
Memory, memory. My grandmother alive

and smoking. Her abusive,
loamed mouth and spectacle of hands

against broad white light on the porch.
As she gestures, swing singing high like knives

sharp and touching. Now I want
to lunge through the belly intercut

and for the wolf in this story to bleed the bed.
But instead, I will speak in zeros and without

looking back. The past is my proof of ends.
Every new encounter is with my own afterlives.

The soul bound by its eyeteeth
to private, necessary murders.

Open his mouth for a word and it will be tooth. As in, he’ll pull

a tooth from a previous life and bring back with it

around birth. He’ll pull his cradle’s ribs down from the bough

and lacquer them in gravity. Notice in the new sheen

of this glazed Eve that there is language even in silence.

The hounds had him too young. The eucalyptus that raised him

dropped its branches in the fertile winds. On the playground

they called him freak. Said his eyes were bearded orchids, his thousand

thin and flickering arms were snakes. If he could go back now,

he’d untangle from his hair a crown of canaries. He’d set them free

to return. Some lives begin and end in levitation.) As always,

he would say nothing. Or, nothing but yellow. As in, he’d pull

the ground’s deep and sparkling strange ones.