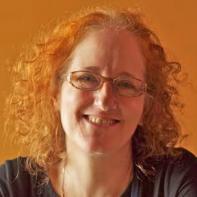 Rachel Cantor is the author of the novels Good on Paper (Melville House 2016) and A Highly Unlikely Scenario (Melville House 2014). Two dozen of her short stories have appeared in publications such as The Paris Review, One Story, Ninth Letter, Fence, and Kenyon Review, and she has received fellowships from Yaddo, the MacDowell Colony, the Millay Colony, and elsewhere. She lives in Brooklyn, where she is always at work on another book.

“That Point of Breaking,” an Interview with Rachel Cantor

This interview was conducted via email by Interview Editor Audrey Hawkes. Of the process she said, “Rachel was a delight to interview! Her novel introduced me to the world of translators, and the importance of place really spoke to me. Getting to discuss these ideas with her was such a treat.” In this interview, Rachel reveals how she developed her characters, what books she’s reading lately, and how she found a writing support system.

Superstition Review: One of the most complex relationships in Good On Paper is Shira and Ahmad. Can you share how you developed that relationship, both what we see on the page and their backstory?

Rachel Cantor: I had intended Good on Paper to be the final story in a collection of short stories about Shira and her friends. Her character, then, and the characters of Ahmad, Shira’s daughter Andi, her love interest, and other friends, existed before the novel. They had, in fact, already endured countless ups and downs. Once it became clear that Good on Paper had to be a novel, all those conflicts that were nascent or not fully developed in the stories had to become larger—so large they could easily explode. And then Shira would have to find a way to either resolve those conflicts or allow them to destroy her relationships. Because I knew these characters well before I started writing Good on Paper—what they wanted, what they feared, their strengths, the mistakes they’d made—it was easy to see where their fault lines were and how I could now pressure their relationships in Good on Paper to that point of breaking.

SR: Seven-year-old Andi is such a fun character to read. What was it like writing a young character? Did you ever worry about making her seem believably her age?

RC: I loved writing the character of Andi! She’s such a funny kid, both precocious and very much a young child. She loves to read, she strikes tough bargains over the vegetables she has to eat, she’s prone to tantrums, she’s smart, and vulnerable, and can be emotionally wise. Like all kids, she says the darnedest things! More generally, there’s something about seven-year-old characters that moves me—the child in my first book, A Highly Unlikely Scenario, is also seven. They’re at a critical turning point: they still have much of their childish innocence but they’re beginning finally to understand the adult world around them, and they’re about to lose their baby cuteness, if that makes sense. I wasn’t terribly worried about making Andi believable, but I did ask one of my sisters, who’s a mother and a child psychologist, to read the book, looking at it from both perspectives. In particular, she advised me about imaginary friends and on a few occasions told me a statement or action I’d given Andi was maybe “too young.”

SR: I loved all of the translator terms throughout the novel, like I was getting mini lessons in translation. One of my favorites was “false friends” — words that look similar in two different language, but have totally different meanings. Could you describe your process for researching translation?

RC: Basically, I read everything I could find about translation—essays and articles about translation theory and practice, especially when they related to translation from the Italian. I also relied on several translations of Dante’s Vita Nuova (and, more invisibly, Dante’s Inferno and Purgatory) as well as the Song of Songs, and read the prefaces and translators’ notes in each version. I’ve noted these in the Acknowledgements, and also on Goodreads, if anyone wants to know more. I did this research in part because I wanted the reader to know how deeply Shira thinks about translation and to understand the textual problems she must solve in order to translate Romei’s work. But I wanted to do more than just give Shira a job! I wanted the concept of translation to help us understand Shira’s most basic interpersonal challenges, and I wanted the translation process to help Shira begin addressing those challenges.

SR: The idea of place and home play a big role in the novel, and I especially connected with Shira’s reluctance to leave New York for Connecticut. What made you choose the locations you did for the book (New York, Connecticut, Rome)? How has place played an important role in your life?

RC: I have lived in and traveled to many, many cities, and countries around the world, most of which I’ve not used as settings for my fiction. I was very young when I lived in Rome and New York, though—I was an adolescent in Rome and a new college graduate on the Upper West Side of Manhattan where Good on Paper is set. Both are extremely vibrant, fascinating, multilayered cities, which absolutely captured my imagination—you could say they imprinted themselves on me! I’ve written about both quite a lot as a result: A Highly Unlikely Scenario takes place in part in Rome, or at least a fantastical version of thirteenth-century Rome, and I set many short stories about Shira and her friends in both Rome and New York. Connecticut really isn’t given much credit in Good on Paper: to Shira, it represents all suburbs, which are very much not to her taste!

SR: Shira occasionally turns to friends when she struggles with the translation process — people like Benny and Ahmad. What is your own writing community like? Who is your support system?

RC: I began, like many of us, by writing alone, and wishing I had writerly community, but it took time for me to find my kindred spirits. At first, I found them at writing residencies, classes, and conferences, like Bread Loaf and Sewanee. Their moral and sometimes very practical support changed my life in many important ways; I continue to meet writers every year through such venues. I eventually also found writers online, mostly through Twitter and Facebook. Online writers offer critical support on a daily basis, even if we’ve never met. We’re all working alone at our computers; social media has become our virtual water cooler! When Good on Paper came out, for example, I “friended” at least a dozen writers whose books were coming out at the same time. I love following their success, and buying their books, and going to their readings, and Instagraming photos of our books hugging in store windows!

SR: Good On Paper is a story about characters with a passion for reading and stories. What are you reading lately?

RC: I’ve been reading some great books lately. Top of the list are Dylan Landis’ two thrilling books, Rainey Royal and Normal People Don’t Live Like This; two books from the fabulous small press Two Dollar Radio: Sarah Gerard’s Binary Star and Rudolph Wurlitzer’s Drop Edge of Yonder; Alexandra Kleeman’s You Too Can Have a Body Like Mine; Samantha Hunt’s fascinating Invention of Everything Else; and Sari Wilson’s luminous Girl Through Glass.

SR: There are many very short chapters in Good On Paper, some only one page long. What made you decide to split up the sections this way as opposed to the more typical longer chapters?

RC: I think this wasn’t so much a decision as it was a natural result of the voice I use in the book. Shira’s voice seemed to demand a fairly rapid pace, though she does, of course, linger sometimes. Shira is a New Yorker, of course, and we New Yorkers move and speak quickly, I’m told!

RC: I live in a very small space in Brooklyn. I wish I could say I had a lovely office with inspirational quotes and pretty pictures on the wall, but in fact, I work on a couch with a view of my fire escape and the occasional pigeon!