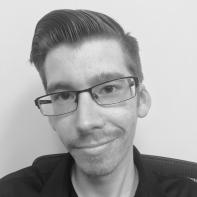 Jonathan Louis Duckworth is an MFA student at Florida International University, where he serves as a reader and copy-editor for the Gulf Stream Magazine. His fiction, poetry, and non-fiction appears in or is forthcoming in New Ohio Review, Fourteen Hills, Literary Orphans, Cha, Off the Coast, Superstition, and elsewhere. He is a dual-citizen with American and Belgian citizenship. Apart from his love of the written word, he also loves to cook, and hopes to start a cooking blog one day.

Bon Papa, I have your hair. I have your eyes too, only they’re bigger—you told me so in a dream. My words are all I can offer you. This is my song to you, Bon Papa.

At the same time, in Herstal, Belgium, seventeen year-old Louis Gramme has to be carried in his father’s arms down the staircase into the cellar of the family’s home. Yesterday Louis visited a doctor to have warts removed from his legs in an agonizing operation that has left his legs mummified in bandages and useless for walking.

The air raid sirens drone in Herstal and Liege, but no Allied anti-aircraft fire. These are no bombers. Against this attack, there’s no defense. Already a few V-2 ballistic missiles have collided into buildings, streets, and lives. The crashes are enough to rattle dental fillings in teeth, jars from shelves, paintings from walls, crucifixes from thresholds (and just as the devil is at the door).

They believe they’re safe. Apart from Louis and his father, the cellar fills up with Louis’s mother, his sixteen year old sister, Raymonde, and a neighboring family whose house lack the sort of sturdy cellar that makes the Gramme family feel so safe. Raymonde was annoyed by the interruption the rockets have caused. When her father pulled her from her desk, she was busy writing in her diary. In three days, someone will find the diary, dust off the detritus, and leaf to the final lines. They’ll find the beginning of a story entitled La Mort de la Poupee. The Death of the Doll.

Father sits Louis down by the soupirail (cellar window), so that Louis might have a chance to crawl out. When the rocket strikes, the Gramme house forgets its shape, forgets it has a roof, forgets its number of floors. Louis’s senses skip terror and move straight to pain. There will be time for fear, but not now. While the house forgets its shape, the bodies of Louis’s sister and mother forget their shapes as well as bricks and wooden beams rain upon them. In seconds their punctured lungs and crushed hearts will forget how to bellow and pump, their cells will forget how to replicate.

In the same instant as its doors swing open, a bonnetière (an armoire for hats) falls onto Louis, pinning him under its weight, enfolding him into its inner dimness.

Louis thinks he is screaming. But Louis can hear nothing. When the ringing in his ears finally ceases, he is not screaming anymore. He hears his papa calling to him.

Louis says that he is still alive, and asks if his father can help him, take the bonnetière off him. But no one answers.

[For three days, Louis Gramme rehearsed being a corpse in a coffin.]

Wernher von Braun abandons the window and returns to his mug of now tepid ersatz. Beside a heel of bread smeared in last summer’s cherry preserve is a sketch of a different kind of rocket, one no one would afford him the time or capital to build. Things that cannot kill hold no interest for his bosses. This frustrates him. Can’t they see that any Reich that is to last a thousand years must spread to the stars?

[Wernher von Braun was a good man at heart.]

In a deep hole in the world, at the bottom of a cellar in Herstal, a boy named Louis feels himself dying. Nothing vital has been injured. The same bonnetière that now traps him shielded him from the falling bones of a house forgetting its old shape. But still, he knows he is dying.

Louis has given up speaking to his family, calling out their names. This is not acceptance of his orphaning. Acceptance is a long switchback trail up a strange mountain. For now, acceptance must wait as Louis navigates survival. From his time in the scouts (pronounced, in the Flemish way, as “scoots”), he recalls the importance of keeping his lips moist. To this end, he must use his urine. Constrained and hurt as he is, it takes him a half hour to remove his right shoe. It takes another fifteen minutes to remove his sock. He decides not to bother with his belt buckle, and instead shoves his sock into his trousers and pisses his pants. He tucks the now soiled sock into his mouth.

It isn’t so bad at first, at least while it’s warm. The warmth of the pissed sock is a sliver of warmth in the deep winter chill. Deep in the bowels of what was once a cellar in what was once a house, all the cold in the world has descended, invading the wooden shell of the bonnetière. But the warmth doesn’t last. Soon the urine-soaked sock turns cold. In a matter of hours, the urine will become stale, phosphates and ammonia precipitating, filling Louis’s coffin with the strangling stench of industrial cleaner.

[Louis Gramme wonders if death would have been better.]

Far away, in Peenemunde on the Baltic Coast, Herr Professor Wernher von Braun takes stock of new workers arrived this morning from Buchenwald. More people will die building V-2s than will be killed by them. These workers in their striped shirts, skeletons really, are so emaciated that he wonders if they might not disappear entirely were they to turn at a certain angle, like the two-dimensional lines drawn from the graphite of his pencil. He has resigned himself not to ask questions about the laborers’ situation. He cannot afford to agitate those who send him his orders. He cannot bear to meet eyes with the SS guards who deliver the prisoners—Jews and communists mostly, but a Russian prisoner here and there—so he instead looks at the silver skull Totenkopf badges on their caps when they speak to him. He knows his place. He knows that he is one mistake, one telephone call, one rubber stamp, and one ride in the back of a Henschel truck away from becoming another set of bones in a striped shirt.

[Wernher von Braun is a coward at heart.]

[Even now, as this is written, as this is read (these are always the same instant), Louis Gramme is trapped under the bonnetière in the ruins of the cellar. There is never and will never not be the case.]

It is useless to speak of hours after a certain point. All that exists to Louis are his body, the walls of his coffin, the winter chill that penetrates his marrow, and his hunger. Hunger is an unlikely friend. Hunger is what keeps his senses primal, preoccupies his amygdala. Hunger is what fills his brain with potatoes. As with any Belgian family, the Grammes stocked the cellar with food—carrots, onions, bottles of beer and wine, and potatoes. Louis knows there must be some lying around. If he could escape from the bonnetière, he could find a potato and eat it. Eat it raw. But as he is trapped, he cannot find a true potato, cannot hold it in his hand or bite into its hard, winter-chilled flesh, so he must turn to the architecture of his imagination.

[In his coffin, Louis imagined the perfect potato. The Platonic potato.]

Many years later, approaching death, Louis Gramme sits down on a park bench with his daughter, Raymonde. They have not walked far, but what little distance they’ve covered has taxed him. At a frites stand, he bought for his daughter a cone of succulent golden pomme frites, finest and most accomplished emanation of the potato, smothered in orange andalouse sauce.

As they burn their palates and tongues on the searing fries, Louis Gramme tells his daughter “Je suis foutu.”

The prostate cancer has already metastasized.

But to get to this point, Louis must survive in the cellar. This is not assured. There are many worlds where this doesn’t happen. Where Louis dies in the cellar. Where the bonnetière does not capture him but crushes him instead. Where he never escapes. Where he never grows up, never becomes a businessman, never meets Odette Lange, never fathers Danielle, Raymonde, and Bernard Gramme, never has a grandchild named Jonathan Louis Duckworth.

In 1969, Professor Wernher von Braun, now a director of operations in the Apollo space program, watches his Saturn V rocket booster bearing Neil Armstrong, Buzz Aldrin, and Tim Shepherd into space and toward the moon. The champagne bubbles now rising in his glass seem to be rising just as fast as the fragile aluminum craft now hurtling toward Earth’s selenite satellite. In 1976, traveling businessman Louis Gramme boards a trans-Atlantic flight on the supersonic Concorde.

[One day at an airport in New York City in 1976, a graying and ailing German scientist in the city for a conference realized he forgot his watch, and asked a Belgian businessman wearing a fine gold Rolex for the time of day. 11:32, the Belgian said. The German cursed, for he was running late.]

Sharing the aircraft with Louis is a quartet of boisterous mop-topped Brits. He doesn’t recognize them. He doesn’t understand why everyone else in the plane is constantly whispering about them, chancing glances at them, giggling. He won’t learn until he lands in New York that these four men are The Beatles. Why would he have recognized them? What are they to the likes of Frank Sinatra? When he returns to Brussels after the conclusion of his trip, he will make the mistake of mentioning this to his daughter, Raymonde, who will never let him forget how silly he was not to ask for autographs.

[Louis Gramme was only human.]

On the third day, when Louis’s uncle, Albert, finally comes to the broken house with a team of malinois rescue dogs, and calls out to his brother, to his sister-in-law, to his niece, and finally to Le Petit Louis, Le Petit Louis can hear him but cannot speak. There is no moisture left in him. His throat has been wrung out past all point of usefulness. He can’t call out to his uncle to say that, yes, Le Petit Louis has survived. To his fortune, deathly silence does nothing to discourage Uncle Albert.

Wernher von Braun dies of pancreatic cancer in 1977 at age 65, never aware of the existence of a Louis Gramme or the hell that his invention put him through. He is remembered today as the father of the American space program, designer of the Saturn-V rocket booster.

[Wernher von Braun was a hero, was a monster, was a man.]

I didn’t attend my grandfather’s funeral in Brussels. I couldn’t make the arrangements to cross the ocean in time. I understand that everyone cried, even the priest. And so it upheld the standard paradox of Western funerals—that the happier the life, the greater the flow of tears.

I love you, Bon Papa. I always will.

‹ "The Get Down," by Joe Oestreich up "To Make It Make Sense," by Kristina Moriconi ›