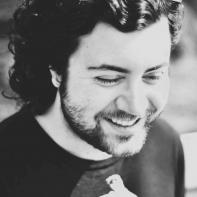 Bradley K Meyer writes from Dayton, Ohio. His work has appeared or is forthcoming in decomP, DASH, Toad, Rougarou, Rust+Moth & others. He is the author of a chapbook, Hotel Room (Vostok East Press, 2013). He edits Pouch Magazine which lives at www.pouchmag.com

In one of the workshops I teach we talk about our feelings because poems are about feeling & by the end of it everyone knows just how to express their desire for a refund. Education is expensive. I moonlight as a pretend graduate student where I am pretend concerned with the following problem: how do mating sound & ritual in animals who have spent generations in captivity differ from those who have not. It is a blind study I photograph in mittens, without revealing which finger opened the shutter or pressed record. It was all of them. I hid how much I meant it. Years later, when I putter over the data, I will cool my mug of tea by whistling on it in one prolonged note I do not know the name of.

You are more likely to die this year than you are last year. Try not to contract department store nihilism, I tell myself. Try to buy a new candle without allowing decorations in the housewares department to antagonize you. ‘I love you more -- no, I love YOU more’ is an antagonistic series of statements. Do not love me at all. I choose balsam fir. I tell the cashieress it’s the best one. She is ringing it up. I catch myself thinking aloud the pretend elements I’m going to add to the periodic table poster at school: Testiculum, Milk, Afghanistanium. She frowns. There is a surplus of stuff as it is.

Since this morning, I’ve thought of an elephant pregnancy as a measurement of time. Two years. A commercial made me think of that. I wonder how many other African animals I can name. Lion. Sloth. Not koala. Probably musk deer. Not sloth as it turns out. What’s on the radio first thing in the morning, like a good parking space, sets the tone for the balance of the day. Since U Been Gone. Kelly Clarkson is my spirit animal. Sometimes pop songs make me think of the ocean. I would need to believe in past life regression to know why. Someone said the other day, ‘What if there were two moons?’ I said, ‘Yeah, what if.’ but thought, ‘I wonder how it would affect menstrual cycles.’ Wikipedia said, 'Kelly Clarkson would have been a marine biologist if she hadn’t won the television thing.' There are so few true coincidences.

‹ Poetry up A Poem by Clare Paniccia ›