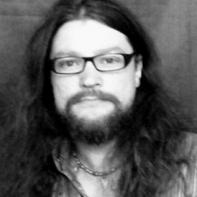 Alexander Scott Hughes was born at the Indian Hospital and grew up in Phoenix. Although a mainly self-taught artist, Alexander received formal training at the Art Institute of Phoenix and Phoenix College. In addition to showing his artwork in Phoenix area galleries, he was a featured artist for the Young Collectors of the Phoenix Art Museums 2008 fundraiser at the Phoenix Art Museum, a contributor for the journals Bad Subjects, The Aesthetics of Violence, and Merge, and showed in juried exhibitions such as Artlink's 9th Annual Juried Art Exhibition and the Mark Woolley Gallery's Alien & Sedition show in Portland, Oregon.