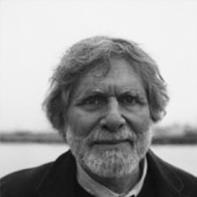 Alan Cheuse, National Public Radio's longtime "voice of books," is the author of four novels, three collections of short fiction, and the memoir Fall Out of Heaven. As a book commentator, Cheuse is a regular contributor to National Public Radio's "All Things Considered." His short fiction has appeared in The New Yorker, Ploughshares, The Antioch Review, Prairie Schooner, New Letters, The Idaho Review, and The Southern Review, among other places. He teaches in the Writing Program at George Mason University and the Squaw Valley Community of Writers.

Light silvery metal, a square box-like piece mounted on the top where it centered over the knuckle, and in the center of the box, and opening—
Peep inside, that is, press it in a dark room to one eye while the other you keep closed tight, and as soon as you become accustomed to the dark you'll begin to see light swirling within the ring, halos and rings of glittering pieces of light, particles of atoms, of atoms growing smaller and smaller in the depths of the once tiny but now ever-expanding space, a peek into another space, into a seemingly infinite galaxy of galaxies, dancing, spinning, sparkling, exploding now! oh, that flash of fire in the distance! but where? but how? how far away? a fingertip and an infinity!
And what if this could be real? And what if there were stars in all those flashing rings of light, stars with planets and planets with creatures living upon them? what if there were other human beings living there? what if, what if you looked long enough and hard enough, squinted at this peep-hole all night long until you might see into the lake of stars and into the small galaxy with the yellow star and the green-blue planet resembling earth and on down through the blue-white atmosphere to the continent of North America and in the east of that formation to the state of New Jersey and the town that lies at the confluence of waters, where the river meets the kill to form the bay, and a boy lies in the dark, his heart beating with excitement, with the expectation of worlds to come while he squints into the peep-hole of a ring?