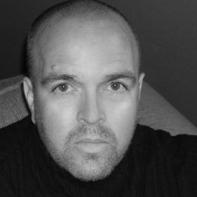 Peter Jay Shippy is the author of Thieves' Latin (University of Iowa Press), Alphaville (BlazeVOX Books) and a novella-in-verse, How to Build the Ghost in Your Attic (Rose Metal Press). His poems have recently appeared in The American Poetry Review, Harvard Review, and Shenandoah, among others. He teaches literature at Emerson College in Boston.

Seemed like a first-rate strategy, Your Honor,
A way for me to gift verse to the wee set
Or, if you like, a mode to re-modal raw
Minds. And who better than Crazy Legs Rilke?
I mean, have you Read Rainer Maria's verk?
No? Is this water free? Anywho, his poems
Are jam-packed with dragons and unicorns
And a dogged bruin named Ren Karl
Who has this 24-7 hankering for beer
Which he calls bersteigung! And yes
Yes, now I see how a hard drinking cub
On a waverless quest to kill the snake
That bit Eurydice's sweet asssorry, dear
Derriere? beloved buttocks? could strike
Some parents and or guardians as inapt
Or iniquitous for the playground scene, like
That plumping dad-type who screamed: Keep
Your High German away from our jungle
Gym! I think your Honorette will agree
That he saw my laudable endeavors
In a predetermined dark light. I declared
This in my report to your constables.
I declared that that man was prejudiced.
He threw Yodels at my head. Yodels?
Your Honoress, in all honesty, can you
Seriously mull the opinions
Of a man who won't even crack the piggy
For a six-pack of Ho-Hos? Is it just ich?
Is it just moi or is it clear as day
That those narrow-minded ber-bullies
Simply transposed their self-hate into hate
For modern poetry? It's Freud 101.
Thanks be to the good men and women
Of law enforcement who arrived just in time
To arrest me slash save my beloved buttocks.
But if I may engage my retrorockets:
Doesn't Ren Karl's attitude offer
A teaching opportunity? A spot where
Child and blood relation can reach some
Accord on revenge, hibernation sex
And handguns? I mean, Ren Karl just wants
To return to those simple-hearted times
When Rainer and Orpheus would roll
A number, take a tug from my wineskin,
Pull out their pan-flutes and play for all
The shepardfolk and woodland critters.
Your Honoris, don't we all yearn for a clean
Sandbox and a draft of bersteigung?"

To Heal a Weakling Child

Who the pluck replaced my lambs
With mist? I yell, but no one deigns reply.
Mom's listening to The Cure, again,
Which means we'll drink, eat, and get hairy.
Father's hiking to the Stone Age,
Backwards, to erase his carbon footprint.
Sissy & her caste are beaching
Their lissome shapes in sympathy
With that pod of suicidal dolphins.
What's the weakling child to do?
I open our attic window to let
My nostrils whew a cloud of molecules
From Smelling Salts Flat. Eureka!
It's a perfect day to spend wholly
Outside narrative, wandering lonely
Through the blanderness, wondering
Where and when that blue bolt of fate
Might spring out to rake my little pink
Neck. Euphemize me! Granny's parked
On our denim divan, crocheting
Jellyfish for this year's Towne crche:
Christ Dives the Great Barrier Reef.
I know that Nana's the big bad wolf
But I'll never tell. Should I give
A second thought to the blood dripping
From her canines and the wool caught
In her paws? Que sera, sera.
We exchange needles and knuckle-
Bumps and I'm off to seep and deploy.
On the corner of Main & Trivial
I see the Widget Boys stapling
Posters to every other Maple. Ivan
& Babe believe that they're the rein-
Carnation of Albertus Magnustwo
Matchless twins for one dead alchemist,
I guess. The Widgets are demi-famous
Maybe you read about their joust with pi?
It was written up in all dimi journals?
They filled the family manse
With abacithousands of beads and rods
Were hotwired so they could derive pi
To one billion decimal places. Like me
They wanted to see God's mug. You?
"God is so very small and fragile,"
Babe said, "That It cannot be kept
In a rational fish bowl or equation
Because if It hits the side the impact
Will kill us." Today they're giving us
Notice to be on the lookout
For Henry, a lost bunny. When I point
To the rabbit in Ivan's pocket,
They laugh. "Yes, that's Henry, sure, but
According to our calculations he'll be lost
Tomorrow." When the brothers pinch
Each other's bellies and straighten Henry's
Bowtie I bid adieu. I decide to sate
My thirst for the sea by visiting
My friend Kimiko, the fish monger.
I find her suffering a bout of head-
In-the-tank-syndrome. The lobsters
Bop her on the nose with their silk-trussed
Pincers. I use a net to raise her
Talking face. "Diogenes died by holding
His breath," she wheezes. "He left orders
For his body to be tossed outside
The city walls so wild dogs could feast
On his flesh. Rousseau packed it up after
Colliding with a Great Dane." "Hamlet?"
"In The Lion King the ghost of Mufasa
Exhorts his son to revenge his murder
Thou art a scholar, speak to it, Pumbaa."
One of the silk cuffs dangles from Miko's
Earring. We watch the unchained lobster
Use its free claw to crush his brothers.
"No, Prufrock! No!" I offer Miko
A tissue. "Heraclitus perished after
Smearing himself in cow-dung
In order to cure his dropsy. The sun
Fired the shit hard, trapping him.
He was eaten by his own mastiff.
Your Grandmother phoned. She needs you
To pick up a few things at the market."
Kimiko hands me a list written
On a newspaper wrapped around
A pound of yesterday's red snapper.
On the way to the superstore
A group of kids leap from the bushes
To ambush me with toy microphones
And TV cameras. From our last
Dogwood I hear an emerald beetle
Recite Li Po: A dewdrop of wine under
The flowering tree, I drink solo
For no chum loves me. Finally, I arrive
At the Soy Polloi. After passing through
The see-through scanner I'm greeted by
My personal shopper. He looks over
My list and says, "Let me take a guess:
D'agneau en crote?" I shrug. "Iway
Onlyway peaksay igpay atinlay."
Is that a ghostly bleat I hear? He fills
My cart while scatting the store's jingle
la Mel Torm, the Velvet Fog:
Ahoy! Ahoy! for Soy Polloi
We buoy your oy on utter joy.
As we enter Frozen Foods to scavenge
For peas, we are met by Dr. Youlou,
The department chair. "I was once
A glaciologist," Youlou says, "but
These days that work is tough to find."
He leads us to a food case to lecture:
"Our knowledge base of Antarctica
Erof frozen veggies has changed since
Shackleton's era. We no longer see
The refrigerator as a monolith
Of ice whose only purpose is to be
Subjugated in the name of king
And country. We scientists now believe
That this is a dynamic, sentient being,
Constantly birthing flux. Snow or snap?"
Later, at home, we all gather round
The hearth for cider and johnnycake.
Mother catches me yawning and suggests
I go to bed. "But how will I be able
To sleep counting clouds instead of sheep?"
Grandma presents me with a stuffed lamb
Whose fleece is white as fleece.
With a clan like this what will I be?