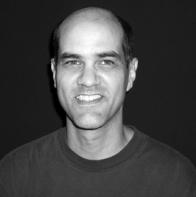 Bob Hicok teaches creative writing at Virginia Tech University. His books include The Legend of Light, (1995) Plus Shipping (1998), and Animal Soul (2001), which was a finalist for the National Book Critics Circle Award. He has published two other books — Insomnia Diary (2004) and This Clumsy Living (2007), both with the University of Pittsburgh Press. His poems have appeared in The New Yorker, Poetry Magazine, The Paris Review and The American Poetry Review, as well as four volumes of The Best American Poetry. Awarded a Guggenheim Fellowship in 2008 and an NEA Fellowship in 1999, his work has also been reprinted three times in the Pushcart Anthology.

Another form of catch and release

Yesterday morning, I was two hundred miles
from the headwaters of the Mississippi.
I've come home to miss
what I didn't see. In movies, when a pact

is needed, men cut palms and shake hands.
What if blood betrays, what if movies
aren't real? Simply by looking, I oathed myself
to the swamp, green at the exit

for W.W. Mayo's house, tree-stumped
not far from where canneries
once sealed corn in tin and put a green giant
on the can, pledged to return

and push on to where the country begins
to divide in two. I make these promises
all day long, they're as easy
as crucifixes, wearing them, passing them out

to the cedars, it will distract to say
I'm thinking now of the man
who recommended fucking the stigmata of Christ
but I am, thinking of, not fucking

all the ways we try to get back
to a beginning, as I'm thinking
in the next now of the man at the party
who said, those who actively seek meaning

feel less meaning. "Shived in the brain,"
I didn't offer in a house full of writers
the night before the morning
of learning the continental divide's

where the Gulf and Pacific watersheds
go their separate ways, a slight tipping
from join, it would have sounded contrived
though it feels descriptive, feels honest

to hold in mind a single drop of water
issuing from a cliff or stone or a cleaving
of ground I couldn't help but see
as motherly, that I promise to never visit

with my disappointment, that river,
that undertow of language I ask language

to save me from, and it does, lift me free
and clear, just long enough to let go.

From a distance in late light they're more painting
than people, two under a tree, standing and possibly
nude, possibly Adam and Eve, this is the start
of desire or articulate gravity, the first restlessness
of hand or tongue, more dream than I can tell, now
that a year may have passed, moved forward or back,
I am either younger or older than when I saw them,

if I saw them or felt them, I can't say,
if they were fawns or two sticks on a pond,
though the image, the marks that say tree, torso,
lean, when I close or open my eyes, all look at me
as if I am alive to hold them, and I look back
as if they are alive to hold me, while the space

between is warmed by this affection,
this estrangement of particulars from the drift

She'd come a long way to applaud.
So though the concert was canceled,
she went into the alley and applauded
the back of the theater until she cried
as she'd have cried had the singer
not caught cold or gone back
to smack. The others, who she hadn't noticed

at first, were sniffling too, and a week later,
when there was no concert, appeared again
beside her and every week since
for years, among the rats, who are confused
but adaptive, wildly so, it's said by people
who know such things. The theater owner,

remembering his business classes, charged more
as time passed, until, when managers
or agents called, he hung up, looking at the phone
as if to say, why do you bother me?
The phone, for its part, wanted to live
where someone would speak to it, not through it

to someone else. So it left, just as stars
are on the move, just as our dreams
cling to the notion we can fly, naked,
if our gray matter wants, which, if asked,
will admit that it doesn't think of itself
as gray, red some and yellow some,

as all oracles, in what they whisper,
want to be beautiful, given that the future
has more rooms that need to be painted
than people willing to paint them,
if you look around where you are dying
to feel your private weather more deeply.

When my moustache awoke, it didn't know who it was.
The nurse assured me this would change.

In the hospital, I wrote to my future life,
why did you leave this white room
of kindness? I had no answer. By then,
the moustache had moved to my neighbor's face;
when I say hello, he thinks I'm talking to him.
I hear my hair scream when I shave. So I hum.
There was this moment recently
when I found myself standing
beside a wind-tunnel. No preparation, a sign
on the highway, wind-tunnel ahead.
I put an ear to the metal roar

of measuring the lift of a wing. My other ear,
feeling left out, stopped reporting
what happened on that side of life. To make amends,
I've let it take the first shift
on the pillow, the cool shift
of feathers settling into place, the sound
of a V going by overhead, pointing

or driving a wedge. The new razor on TV
is up to five blades, when does it end, isn't infinity
an ever-slightly cleaner shave? I'm tired,
camouflage, of wearing your face for you. Hiding's
more fun in the open.

A relation of gestures

A piece of pie and a gun on the table.
He got confused, shot himself with the pie,
it was too late by the time

who is and is not a child.
Poor road, to be a killer
of slow moving marsupials. When we stopped
and got out of our cars, each face an act
of non-denominational prayer, I had the feeling
that my back was an ocean, my left scapula

a boat adrift, no sails, a bell far off, clanging,
unheard. Next time, he tells me, no pie.
I know the woman at the bakery,
she'll take this personally, she'll flip
through the model magazines and feel ugly, fat
and ugly, fat and midwestern and ugly.

None of these women are from Indiana,
she'll tell herself, without proof. It's a theory,
really, that the window behind me
and the field behind the window and the trees
behind the field are there as I wonder
if they're there. The night after

the murder show, I saw the guy who died
on the murder show on the lawyer show,
he had changed, was alive and seeking
punitive damages. So yes, I believe in time travel,
tele-portation, that everything is touched
by every other thing in a gravitational

if not phenomenological way. You haven't asked
what kind of pie, gun, cars, boat, I'm thinking
schooner, I'm thinking my right scapula
long ago sank, that I want to dive
on the wreck, and you, please, to wait above,
praying for me to break the surface of the water.

I am always somewhere when I think of somewhere else

In movies, in San Francisco,
when they need a long shot of someone driving
toward or away from trouble, they usually
pick the Bay Bridge, but if love's
to be sought or fled in a car, the Golden Gate's
the likely star of the frame. I'm in Blacksburg
when I realize this, noticing that some
have turned over, leaves

of the silver maple, rocks of the Cambrian
in my hand on a hill
that isn't Kite Hill or Billy Goat Hill, a hill
I haven't named, so what good am I? I promise
out loud to name the hill, out loud
so I can't go back on my word, out loud

so the tall grass of my brain
can pretend the tall grass of the wind
was listening and I owe it the language it so
doesn't crave. But I haven't. That was five minutes
or years ago, my watch has stopped, the one
I never had, all the watches I never had

have stopped, I'll call you
Hill Hill, I'll take pieces of you
to your cousins in San Francisco
when I tell them how politely
you ignore me. I have the sense
this is a Bay Bridge day for me, a Bay Bridge

life. Night. A gun on the passenger seat
as I drive toward Oakland, poor Oakland, we sing you
no songs. Do you know my dog
can no longer hear what I say to her, that the world
is deaf? That's why the gun
is loaded, why the movie of how I feel

is smoking, why I miss you, Coit Tower,
where it's reasonable to look at Alcatraz
rusting away, pining away
for its cons and killers, and ask
if there's hope for me yet.

A wrench or shoe, you choose

Shall we be innocent of banging on the pipes?
I suggest not. Or the children, let the children
bang on us, let the whole hour be the flame

we're adamant about. But not this potato-salad.
It's horrible, the potatoes too big, the mayo
too thick and heavy in the frightening way
of gills on the neck in that picture
in the magazine open on the table. Life
shouldn't have this mayo or gills in it,

bang hard on the pipes, give the children
water canons and set them loose on our lies,
can you honestly say "The Department of Commerce"
is how we thought this would come out? No one
had that dream, no one I want to vote for
or make love with in the potato salad, in the dark,

in the light of shooting stars. See
how they don't go down without a fight?
It's not too late to be why someone says
oooh or aaah as you go flashing by.
I've given you this pep-talk so you
can give it back. There's only one pep-talk

that I know of, so we have to share.