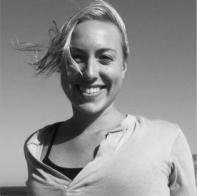 Adina Fleming grew up in Sonoma County, California. She attended Emory University in Atlanta and spent a semester in Athens, Greece. Adina currently lives in New York City where she works, plays and writes.

"Greece exists by the seasons," Harry told me, "everything is completely different in the summer and the winter." He meant that everyone leaves Athens for the islands in the summer, and the surge of the tourist season transforms the city into a pit stop for cruise ships, unloading busloads of sunburned, camera-laden cruise-goers at the various ancient sites. They take photos in front of the stadiums and restored temples and hop back on the bus, ignoring completely the vibrant modern culture of Greece for the dusty one of the ancients. Bewildered tourist families weave fearfully among honking cars and speeding mopeds trying to make sense of snaking streets on their way to the Acropolis. In early fall and winter, the time I had come as a student, Athens is thriving with locals, not tourists, and the spectacular Greek nightlife centers around the city. I straddled the two worlds of interloper and resident — used to the aggressive drivers and leering, lounging, policemen in the streets, but stumbling and unsure as I ordered coffee on my way to school in Greek.

August in Greece was awash. Awash in Mediterranean sun which tanned my shoulders to a deep golden hue but never burned. Awash in white. The dazzling whitewashed buildings of the islands and in rural villages, and the white linen suits on the dark skinned men who lounged at upscale cafes in the cities. The white marble Olympic stadium next door to my school gleamed, blindingly awash in sunlight. "There is something about the light in this country," my aged and pruney Ethnography professor mused during class, sucking on her cigarette, and she was right. It cast a golden film over everything and sparkled off the shining dark hair of the exotic people moving quickly and assuredly through the city, dazzling me. Walking the thirty minutes home from school up the steep and narrow streets to my apartment in Athens, I had to wear sunglasses to avoid blindness, even though they made my nose sweat in the heat.

In October it was still hot, with sultry evenings. When I met Harry on a rooftop bar, I was wearing capris and a tank top at night, a drink sweating in my hand. The outline of the acropolis, lit up by lights at night, shone behind his face, obscured in shadows, his longish hair held back with a thin headband. Up close, his features were dramatic — bright green eyes with long eyelashes, a large straight nose and a strong jaw, permanently darkened by stubble. When I found out he spoke English and was Greek-Australian, I was even happier. 'Harry' was short for a longer Greek name meaning, 'happy light,' and he had an impish smile. I told my mother on the phone how he had come to Greece four years ago as a photographer for the Olympics and never left. She paused.

"Really," she said shortly, an edge of disapproving suspicion to her voice. "Four years ago..and how old does that make him?" I told her I wasn't sure yet, but not too old.

In those last warm months of summer, I rode on the back of his motorcycle the fifteen minutes out to his apartment by the sea. The wind whipped refreshingly over my skin and the permanent beading sweat which gathered behind my knees and along my hairline. I would wrap my arms tight around him, and he would laugh when I clenched my knees against him, petrified as he weaved through cars and cabs, even driving down sidewalks to avoid the standstill traffic. He told me to kick the taxis that came too close, and exchanged yelled "Malakas!" (Greek for asshole/buddy), with other motorcycle drivers. My first night at his apartment, we ate spaghetti with meat sauce on his balcony and made love on his rooftop. I woke up in his bed hot and sticky in the sheets with the sun shining on my face.

I learned to relax on the bike, resting my arms lightly on his waist. Riding back to my apartment downtown in the mornings, I would breathe in bus fumes mixed with salty sea air and the heavy sweet smell of the donut factory by the highway. At red lights Harry would place a hand, huge like an oar, on my thigh and I smiled inside my helmet. Huge billboards advertised the sequined stars of the glitzy Bazoukia clubs, Las-Vegas type shows along the sea where patrons danced on tables and threw flowers at the performers. On Fridays we went to soccer games in the cool evenings at the stadium by his house to watch Harry's favorite team with a name I couldn't pronounce and I would get in free — amongst the blood-thirsty Greek male fans, any female fans were admitted at no charge. In the stands, my blonde head stood out in a sea of black.

I felt the change of the seasons one morning when I woke up to a damp chill in the room I shared with my Tony Robbins quoting, anorexic roommate. Winter in the Mediterranean is a damp cold, which seeps through clothing and rests upon you like a wet, cold hand. The color scheme of the city changed, Europeanized Greeks with gleaming limbs no longer crowded the rows of outdoor cafes in white linen and bright colors. Everyone wore black now — men with gelled black hair and black sweaters, women in high heeled black boots, wrapped in black coats.

By December, riding behind Harry on his motorcycle I shivered in my layers, burrowing my hands into his pockets, my whole body tense against the paralyzing wall of wind that pressed against me. His apartment, old and passed down to him by his grandparents, was horribly insulated, and often colder inside than it was outside. I would sit in the living room on the musty velvet red couch where the heater was, avoiding the icy mildewed kitchen which smelled like stale water. The sun of earlier months had transformed everything with its splendor, and in its light Harry was my glowing Greek lover, tall and handsome. But I woke up in these colder months early in the morning and turned away from him. His hacking smoker's cough repelled me now. In the pale light of the cold morning sun, I couldn't help but notice the fine lines near his eyes. My impending return home to the U.S hovered and I began to see our situation in the context of my life at home. It looked absurd. He was an Australian photographer living in Greece, a man whose age, when I finally muttered it ashamedly to my mother on the phone, had produced a shriek. The brilliant light of summer had gotten too much in my eyes and made me think I was in love. Now with the sobering effects of winter, the soft focus disappeared and suddenly I saw things in the stark fluorescent lighting of drugstores.

On the chilly January day when I stood with my bags by the impatient cab waiting to take me to the airport, I hugged Harry goodbye on his motorcycle, and sobbed, hyperventilating and snotting onto his wooly black-sweatered shoulder. I looked across the street at the motionless old men holding worry beads and cigarettes, slowly sipping NesCafe Frappes at the coffee shop, and the woman at the kiosk who spoke no English and accepted nothing but exact change from me. I looked down at the sidewalks, where the many stray dogs left steaming piles of shit which stayed there, hardening, until rain brought them streaming down the gutters of the city. I thought how much easier, more efficient, and horribly boring life would be back at home. I told Harry I'd miss him, that I'd come back in the summer, and then wrapped him up with my memory of Greece, leaving him to remain just that — a memory.

‹ "Relativism: The Size of the Tsar in Vegas" by Kat Meads up "The Aunt Mary Show" by Teri Carter ›