"The Art of Fiction" by Tony D'Souza 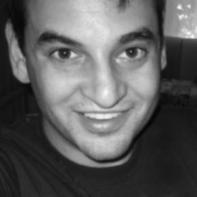 Tony D'Souza's fiction and essays have appeared in The New Yorker, Playboy, Esquire, Outside and Salon. He has received an NEA grant and a Guggenheim fellowship. He is currently the senior reporter at the Mount Shasta Herald in northern California. His novels include Whiteman and The Konkans. Of "The Art of Fiction," Tony comments, "I get a little sick of critics who say I write thinly veiled memoir. If you happen to see Gary at a conference or something, tell him I miss our Scotland days, and to get in touch."

The Art of Fiction

I became friends with the novelist Gary Shteyngart in Edinburgh in '96. I was 19, Gary a couple years older, we'd both drifted into the city looking for our own version of Trainspotting. And we both managed to find it. It wasn't hard. The whole of the Cowgate was a shooting gallery, there were shooting galleries by the Meadows and Queensway and even a couple of places on Rose Street were the kind of squats they showed in the movie. It always rained and that fit the picture, too. You could get creative and make a living standing in police line-ups and what not.

I remember the first time I saw Gary. I'd met these older Swiss-French girls at an after party in Whistle Binkies, I could speak a little French, they took me under their wing and I started staying at their place. I wish I could say that I was sleeping with them, but they just wanted a guy around who wouldn't rape them. They knew where all the arts events were happening and we went to a poetry reading at this place on Blackfriars one night, a Spanish taverna called El Bar. It was a gathering of anarchist poets and Gary was there smoking one of his cigars and he had that trademark beard even then like a bear rug on his face. And with that beard and cigar and his Russian accent it was like he was a young Leo Tolstoy. I couldn't understand half of what he was saying, but it was the beard and his gray eyes that did it: I knew this guy had the true art. It's the same smoldering charisma you see today in his photos on the dust jackets of his books. I told him how much I'd liked his poems, bought him a few tintos, we were friends after that.

We never had money because we wanted to be poets and never having money was a part of that; the mad cow disease hit that year and Burger King couldn't give away sandwiches: they lowered their prices to 50p a sandwich and we ate Whoppers twice a day. Gary pried open a service door into the basement of the Caledonian Hotel with a crowbar he had: we'd sneak in there late at night and eat scones out of the pantry. Nobody was ever around. We'd stand in front of the walk-in cooler, Gary would say "Open sesame," like Ali Baba and we'd go in and eat everything in there too. We were always talking about the Brontes, Dickens, Orwell. We were always talking about Yeats, Baudelaire, Rimbaud.

Then one time we were in the park by Balmoral Castle. It was a pretty day for a change and ladies with little kids were tossing bread to the ducks. Everywhere they tossed the bread the ducks went, so Gary had an idea and we went to a shop and bought a baguette and went back to the park. Then Gary threw pieces of bread to this duck until it came up onto the shore and then he jumped on it and pulled it into his coat and we ran up and out of the park with feathers flying everywhere and then when we were away from there he swung the duck around by its neck. He was laughing like a mad man all the way up the High Street in that black coat of his and smoking his cigar and swinging that duck around. We went to the Swiss girls' place and plucked it and baked it in their stove. Gary had once worked as a line cook at an Austrian ski chalet; the duck was delicious.

It wasn't just Gary and I, of course, there was a whole gang of poets and anarchists and whatnot. There were a couple of Basques, Italians, French, a Majorcan, Canadians of course, an English guy, a Mexican. Everyone was straight and everyone was gay. Everyone was doing everything. The best place to meet was at the basement bar of Negociants. But you could always bump in to people anywhere. There was a place on Southbridge that I'd go to all by myself sometimes to get away from the scene and the girl behind the bar was German and she was tall and goosey with this big nose and glasses and her hair pulled back like a school teacher and I fell in love with her. We'd talk for hours about anything and then I'd tell her I wanted to marry her. Then Gary came by one day and found me in there and after we'd had a few pints he said to me, "She looks like a horse, isn't it? Just exactly like a horse. A big long horse face. Like she drove into the country and stole the face off a horse. Like she will enter a horse competition." All night he went on like that.

But most Gary stories are like this one: we took a day job once in Stirling fixing up this house and we ran out of paint thinner. So the boss sent Gary and I down the street to the DIY for more, and we bought it and came out and started to cross the street. Then this little red car full of guys came screaming out of nowhere and swerved to hit us. Gary had a cigar in his mouth of course, and without losing his temper or anything, he let out a long puff and gave the car the finger. Then we went on our way talking about Ginsberg, Infante, Marquez. Halfway up the street, somebody tapped on our shoulders. It was a big blond Scot with a mullet haircut and the little red car full of guys was idling there. He said to us, "Did you give us the finger?" and Gary said, "Yes." Then the guy said, "Get out of our fucking country," and hit Gary square in the face. It was the kind of blow that could snap a tree. Before I knew what happened, Gary had popped the cap off the paint thinner, splashed it all over the guy, was trying to light him on fire with his cigar. The guy jumped in the car, the car peeled off, Gary crumpled to the pavement. When he came to, he had a big smile on his face. He said to me, "We learn all this in Russia."

Then the Five Nations came to town and Gary and I shoplifted black and whites and took jobs as waiters in a Middle Eastern restaurant on the Haymarket called Hafeaz. We had these rowdy tables of rugby fans, they threw food at each other all through their meals; they threw food at us. About an hour into it Gary said to me, "Balzac is laughing. Neruda is laughing." Plus the restaurant owner was keeping our tips. We were working in the dining room on the second floor, we took a fag break on the fire escape to get away from it. It was cool out there, it was night: right away we had the same idea. So we went back in and Gary collected his checks from his tables and I collected mine, and then we went out the fire escape door, hung from the ladder and dropped down onto the garbage bags in the alley. Then we ran out of there. We counted the haul at the Swiss girls' flat. It was close to 600 pounds.

We took the train across Scotland in the morning, traveled all day across the country, ended up in the Kyle of Lochalsh. Then we took the ferry to Skye. We hitched a ride up to Portree, split a room in the Fishermens Hostel on the wharf. We stayed up there a few weeks, drinking, writing poetry at the table in the common room by the coal fire. Nobody else was there. We didn't even really talk to each other. We skipped stones at the beach and took in the beauty. It was the first time in our lives to just sit and write. Then Gary met this Swedish nurse in the pub; she was on holiday, she like the beard and the cigar and the talk about fiction. She invited him back to Stockholm, that was the last I saw of Gary.

I remember one thing that Gary would always say when we were on Skye. He would glance up from his writing page, look at nothing and say, "The feeling. The feeling."

I was teaching English in Tokyo a decade later, still struggling to finish my first novel, when I walked past the front window of the Blue Parrot bookstore. There was Gary's book. I stood in my raincoat and looked at it and it was autumn all around.