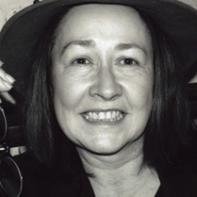 Dara Wier's books include Remnants of Hannah, Reverse Rapture, Hat On a Pond, and Voyages in English. Among her works are the limited editions (X In Fix) in Rain Taxi's Brainstorm Series, Fly on the Wall (Oat City Press), and The Lost Epic, co-written with James Tate (Waiting for Godot Books in 1999). Her poetry has been supported by fellowships and awards from the Guggenheim Foundation, the National Endowment for the Arts, the Massachusetts Cultural Council, and the American Poetry Review. Her work appears in American Poetry Review, Boston Review, Conduit, Denver Quarterly, The Fairytale Review, Hollins Critic, and jubilat, among others.

When I popped you up side the head with the harp of a piano
It wasn't intentional. The number of times I've said I'm sorry
Is equal to the combined incomes of medium tall people who
Self-identify as impoverished, under-employed, willing to work
In alternative bluegrass ensembles for tips. Look at us, heading
Around a corner fretting about which vegetables will be killing
Us next. If I'm a fret and you're the fuselage of an air-ship I'm
Afraid we'll have little to do with one another. I hear someone
Say we're trying to establish a transparent community, I think, no,
More like a collection of lint collectors, barbs in our brains,
Viscosity extreme, and then it's time to be sucked down a drain.
I tend to like my emotional and intellectual extortions plain.
The cougar positioned by the kitchen sink should not collapse.
I want the cougar to be equal to the combined velocity of the new
Light that moves in circles, like when you let your eyes let my eyes
Take in your eyes. Our next target won't be located, it cannot be.

What Happened Where the Shovel Went

A hundred crows worked on the plain on the riverside.
They appeared to be searching for someone.
You have captured my full attention. I wavered
Like a silver chain slung out of a window on the boulevard.
Harsh how a river will not stop at nothing.
I sense the floorboards sliding into darkness,
For me that I'm floating our house creates an illusion.
One oar in our past, one oar in our future, oh lovely
Horizontal reorientation, little skiff of right now
Negotiating as if in the dark it were solving arithmetic,
Narrow go the channels, steady go the sailors
Singing because they have to, when my rope
Is broken there appear several thousand bee eyes
Clinging to this sling on my arm that is broken.

We've Made a Lot of Oxymoronic Promises

We've made a lot of promises. I suspect we've kept many secrets.
I can't say I can really see an albino giraffe standing far away off in the Snowy field's corner though sensing its presence reassures me.
They had been called deluded trees, believing themselves to be human, Standing around, as if waiting in line. Pardon me if I tell the trees other-
Wise. It's better for them to feel okay with their bouffant sallies and
Leopard collars. You know trees move. Entire forests decamp for
Other regions on a regular basis. This has long been standard practice.
I'm a little heartsick in bluish twilight. However, soon I'll raise
A banner of hope which will hearten the darkest fireless evening.
The boys carved wooden ships, the girls shook out their petticoats.
Not another loggia on fire, oh no, rev up the bucket brigade, you know Everyone loves a good dousing. Everyone but the fire, and the fire
Had promised to love you forever.

What was I doing stuck in a math problem in a boy's mind
As he hitch climbed up the dog face of a lava bed in between
Scenes in a picture grove with a dozen big cats' eyes electric
And another one in bed sheets flung about the shrubbery
Which was rubbery and ship-shaped into tear drops with glued-on
Feathers floating and floating and floating and floating and
Finally feeling almost awfully peaceful as the twilight blew in
A man who emerged from his tower of toppling steeples with
A dying antelope thrown over his shoulders into the vast empty
Plus or minus octopus compass landing in the margins unfurled
For a dusk colored pale face half in shadow half in a closet in which
A steam train writes its story down in a tearful code for the mice
Who rule the world there with their pencil groves and their
Ice pins and their eye spikes and their unbreakable valedictions.