"Love in a Handbag" by Mimi Schwartz 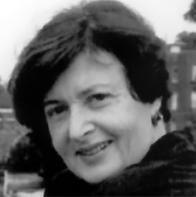 Mimi Schwartz's books include Good Neighbors, Bad Times - Echoes of My Father's German Village, Thoughts from a Queen-Sized Bed, and Writing True, the Art and Craft of Creative Nonfiction. Her short work has appeared in The Missouri Review, Creative Nonfiction, Fourth Genre, Calyx, The New York Times, Tikkun, Jewish Week, The Writer's Chronicle, Florida Review, Brevity, River Teeth and Writer's Digest, among others. She is Professor Emerita of Richard Stockton College of New Jersey and lives in Princeton, New Jersey.

Love in a Handbag

She keeps carrying it around the living room, a black, shiny handbag the size of a suitcase. Her frail freckled arm disappears to the elbow every time she tries to find something inside — and she keeps looking: for keys, the photo of her ten great grandchildren, her VISA credit card, her Inderol pill so she won't shake so much. Some days she can barely hold a fork, it's that bad. But today, with her apartment full of well-wishers and that suitcase in hand, my mother seems fine. I squeeze past Cousin George and his sons to give her a big hello hug. I wish her a happy birthday, tell her she looks beautiful — and then out it comes: “Where'd you get that handbag?” I ask, all innocence. “It's more like a trunk.”

My sister glares from across the coffee table. “Through Ruth. We got it wholesale!” my mother says, smiling at both of us. My sister loves wholesale, especially when using Mom's VISA card. (She once bought me two black sweaters on a binge. Neither fit.)

“Yours isn't leather! Mother only buys leather!” my sister snaps in her I'm-eight-years-older voice. She is now flanking my mother's other side. “Daddy would have a fit if he saw your bag!”

My father was in the leather business, so by Ruth's logic non-leather is still high treason thirty years after his death.

“He'd have a fit if he saw Mother carrying a handbag that weighs more than she does,” I counter. “And is showy to boot. He hated showy.”

This is the most Ruth and I have spoken in a year. We do email if necessary, like when mother fell on the sidewalk on 58 th street and ended up at Lenox Hill Emergency Room. Otherwise we stay out of the same room — ever since a major blowout after Mother fell twice at night. Without asking me, Ruth hired four homecare aides to work 24/7, “so no one would ever sleep on the job.” I'd wanted the woman who took care of my friend's grandmother for years until she died — and slept in (the dining el could become a bedroom). And Mother, of course, wanted no one. Ruth won and now commands her round-the-clock battalion, so whenever Mother complains about no privacy and a waste of money, I say, “Talk to Ruth.”

This birthday brunch was also Ruth's idea. “Come Celebrate. Gerda is 92 Young!.... R.S.V.P. to Ruthie” the invitation said. She made it on her computer, her new thing lately, and mailed it to thirty people on the same day Mom said she'd love to celebrate with a small dinner in her favorite restaurant. I made the reservation, then Ruth's invitation came, and I thought Fine, I'll skip the brunch! But Mom got upset. “What would my friends think if you weren't both at my birthday party?” (The dinner is now next weekend.)Magda, my mother's childhood friend from Germany , comes over and gives everyone a hug.

“Oh what a fine handbag!” she says. Magda is carrying a similar one, but half the size. My sister beams, and I retreat towards the brownies on the dining room table. “But I don't know how you manage it! It must be heavy!” Now I beam, as I pop a brownie.

“Arthur made Patten leather just like this,” my mother says solemnly. Everyone assumes solemnity for my father's memory, but I imagine him, feisty as ever, looking at Ruth's choice and thinking, “Ridiculous!” My mother, until recently, would have totally agreed. But that was before Ruth started calling her five times a day, or more, with “Mother, do this and that!” until she overwhelms her with certainty. I'd need ten phone calls to compete, and I won't do that, preferring a silent fume: Choose your own handbag! Arrange your own celebration dinners!

A week later, my mother and I are in Jubilee, her favorite bistro, and she has to go to the restroom. “Will you hold this for me?” she asks, dropping her giant handbag into my lap. “It's like a trunk!”

I love those words. My words. “Of course,” I say. “You really do need something smaller.”“I know.” She looks at my Sport Sac, a quarter of the size. “I need something like that. Can you get me that size?”

“I'll go this afternoon,” I say, delighted. I will replace Ruth's miserable trunk with a sturdy little bag, just right for a five-foot woman of 92. I will liberate her so she can charge to the lady's room without a second thought, her old capable, vibrant self who made needlepoint murals for everyone's walls, and baked linzertorte for every gathering, and walked so fast, her heels clicked on the sidewalk: Come on, come on!On 53 rd and Madison Avenue, I find the perfect handbag — at a closeout sale of an upscale leather store. Eighty percent off! Much better than wholesale! It's soft black calfskin, easy to open and close, and with great compartments. Twenty minutes later I am sitting on Mom's brown couch, helping her empty everything into it. I show her how her house key can connect to a clip, easy to find, and how she can put her VISA card into an easy-to-reach pocket. “Isn't that better?” I say, triumphant. “And it looks great!” My mother says it's the best handbag she ever owned.

She is holding it close when we go to Jubilee again two weeks later — and I feel like the good daughter at last. I can't do the doctor trips or food shopping or bank forays from two hours away, not like my sister who lives ten blocks uptown. But I did this, I tell myself, I found this handbag and take my mother's hand, smiling. She leans close to me, confidential, and we begin our usual conversation of regret and optimism:

“You should try the Books on Tape that I got you!”

“If only I could remember what I heard….”

“I could show you how to use the rewind button again.”

“If only you could come more often for lunch. Life is getting so lonely….”

Today I don't bridle with insult. “I live too far or I would,” I say gently. Today I smile again and she squeezes my hand, and we walk, arm-in-arm, so slowly, back to her apartment two blocks away.

Everything is going so well, a good visit — No, a really good visit — until the phone rings as we walk through her doorway. My mom rushes for it. “Today?” my mother says, holding the receiver while I unbutton her coat (the one I bought that is lightweight but warm). “A concert today?”She hangs up and rushes to her closet in the bedroom. “Be careful!” I warn, for she can trip on the area rug. Ruth and I both tell her to get rid of it (the one thing we agree on), but Mother ignores both of us. “Don't worry! I have great bones!” she says, with her old confident laugh, the one I always thought I could count on. So far she's been right. Five falls and many bruises, but no breaks, thank God. But how long can such luck last?

Mom takes down Ruth's handbag and tries to open the clasp, her hands trembling. “What are you doing?” I ask.

“Ruth is coming in half an hour. I forgot we had concert tickets.”

“Why didn't she put it on your calendar? We decided to put all your dates on the calendar.”

“Maybe she did. I can't read it anymore.” She is breathing hard, but I pretend she is fine and check the box for January 13th. No concert there. Just: “Mimi, lunch, 12:30,” which Ruth either didn't notice or ignored. Last month, if I hadn't accidentally caught an earlier train, she would have whisked Mother off to the movies before I arrived. I stopped them coming out of the elevator. “You Moron!” and “Spoiled Brat!” flew through the air and down the hallway as if we were again eight and sixteen, fighting over who uses the bathroom first. Those fights usually ended with her giving me a dime for tickling her back, but half a century later, no truce is possible. The elevator bell kept on buzzing. The elevator door kept on trying to close and Mom kept repeating, “How about we all go to lunch?” until Ruth finally stormed off.

Mom and I walked to lunch, and she didn't seem upset, didn't even mention Ruth, which bothered me. Was she that oblivious, her memory that eroded? Or, I began to wonder, was she setting us both up? After all, if Ruth and I agreed on Mother's life, she wouldn't get five phone calls of convincing every day. Or more on days when I think I can coax my old mom — the woman in the sleek red dress, radiant on her dresser top, younger than I am now, the perfect mother of memory — to come back. But she won't, no matter what two daughters do. We are losing her.

My mother's hands are on the clasp, shaking out of control. “Will you help me!” her eyes plead. I want to yell NO! NO! If you use Ruth's trunk, do it yourself! even as I tell myself that she's an old woman, she's having a hard time — and she is my mother. Grow up! Wallet, glasses, pill case, handkerchief. I let them disappear into the trunk's black hole before kissing her good-bye. I leave her on the edge of her chair, Ruth's handbag in her lap. “I love you, Mom,” I say, stroking her thin white hair.

“I love you, too. And, please, be careful going home!”

She presses my arm — To stay? Or to go? — and I am almost out the door when the phone rings again. It's Magda. My mother starts to tell her how upset she is today, how she forgets everything, and how exhausting it is keeping her daughters happy. “If only they could get along!” she says. And that's when I let the door slam behind me like the child I still am, muttering it's not my fault.

‹ "Evacuees" by Katherine Tanney up "Patch" by Samuel Pickering ›