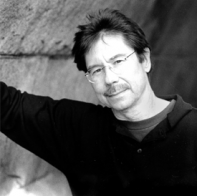 Stuart Dybek is the author of three books of fiction: I Sailed With Magellan, The Coast of Chicago, and Childhood and Other Neighborhoods and two collections of poetry: Streets in Their Own Ink and Brass Knuckles. His work has appeared in The New Yorker, Harper's, The Atlantic, Poetry, Tin House, and many other magazines, and have been widely anthologized. Among Dybek's numerous awards are a MacArthur Prize, the Rea Award, PEN/Malamud Prize a Lannan Award, a Whiting Writers Award, and several O.Henry Prizes. He is a Distinguished Writer in Residence at Northwestern and a member of the permanent faculty for Western Michigan University's Prague Summer Program.

Fiction Editor Sara Scoville was fortunate enough to obtain an interview with Stuart Dybek for our Fall 2008 Issue of Superstition Review. Sara said of the interview, "I was first introduced to Mr. Dybek's work through a story of his, "We Didn't" in Story Matters by Margaret-Love Denman and Barbara Shoup during a recent creative writing course. An interview with him followed, and I found it interesting that it was originally a poem that failed, and a response to Yehuda Amichai's "We Did It." Although I deem myself "poetically challenged," I read "We Didn't" out loud over and over, listening for the musicality and rhythms in the prose. Through studying his work, I began to recognize these qualities in other stories, and began to apply them in my writing. In short, he taught me something and I yearned to learn more. In researching his career for our online interview I stumbled upon two short shorts of his "Mole Man" and "Brisket" featured in Smoke Long Quarterly, and at least a dozen other interviews which influenced my questions.

Superstition Review: Critics have dubbed you "master of the short story." What about your stories inspires such compliments?

Stuart Dybek: I am answering this question in Japan and so that makes me reflect on the very notion of mastery. In Japan, artists in the traditional crafts such as paper making and pottery are recognized by the government as carriers of a tradition and supported. It is a lovely idea. But certainly not one I apply to myself. There is another connotation of mastery that I am less comfortable with, one that implies dominance and control, and what I seek as a writer is to put a story into motion so that the relationship is between story and reader. So far as the relationship between story and writer, in the few cases when one is lucky enough to blow a breath of life into words on the page, then the story begins to assert itself and at that point I seek not to master it but to surrender to it.

SR: Could you talk about the challenges and rewards of writing flash fiction? Where do you see this form in the future?

SD: Again the context of Japan is applicable to one of the many ways the flash fiction form could be discussed. Kawabata one of my favorite writers and someone I would term a "master" of the short short form wrote pieces he called not flash fiction but palm-of-the-hand stories. He said many writers write poetry when young but he wrote palm-of-the-hand stories instead. Implied in that statement is the they do relate to poetry but are not the same. It is that elusive relationship to both poetry and fiction about the form that interests me. There is a fragmented unfinished quality about many of Kawabata's palm-of-the-hand stories, too, and that suggests that flash fiction, not a term I like as much, can redefine what a story might be in terms of completeness.

SR: I've read that many of the characters and situations in your stories are based on actual childhood experiences. How do you go about transforming these experiences into fiction?

SD: Does any writer ever sit down with a personal experience and actually think about transforming it into fiction? Or, isn't the mere fact of using the basic craft of fiction going to be transformational without having to think along such grand terms? I try and make it come alive on the page. I think that's finally harder to do than transforming anything. One way that is done is to tell the fictional lie, ie, to give one's imagination the freedom to add invention to experience and memory.

SR: You mentioned in another interview that you've received letters from people in your old neighborhood that "recognize" themselves in a character. Have you ever offended anyone? Do you ever fear that you might during the development process?

SD: I have offended, inadvertently I hasten to add, a few people over a long time of writing stories and poems. I try to learn from those few times how not to do it in the future by inventing more thoroughly so that the disguise of invention prevents the inadvertent "insult." In other words rather than censoring myself I am turning it into a goad for deepening the imaginative experience.

SR: Most of your characters mirror the blue-collar working class of the 1960's and 1970's, and the tensions amongst various ethnic groups in your Chicago neighborhood. How do these characters and the tension among them speak to contemporary problems?

SD: Of course, attitudes towards ethnicity, race, bias, prejudice have been around in America, long before I wrote about them in the setting of mid-to-late 20th century communities, and they are still one of the central issues of a democratic society so, yes, that subject no matter when set is always, unfortunately, "contemporary."

SR: Your stories are well known for exploring issues of community, identity, immigration, and displacement. Can you talk a bit about what draws you to this?

SD: A lot can be done with the subject of immigration. Too much to be answered in a single question. It can be treated as a social issue, as a defining national feature, as an alternative vision of McMerica, as an exploration of class, as the theme of The Other, as a doorway into myth and fable and folklore, etc.

SR: You write almost exclusively about your experiences growing up on the Southside of Chicago. Have you ever considered stepping out of Chicago to write about other experiences? Teaching in the Virgin Islands perhaps?

SD: I am currently writing a book of poems set in the Caribbean and in rural Iowa, two places where I lived, besides Chicago.

SR: Who do you like to read? Who has influenced your writing? What are you working on now?

SD: I will go back to the earlier questions-in preparing for this trip to Japan I have been reading many Japanese writers from Basho and Issa, two of my favorite poets, to Murakami, a wonderful writer! I have mentioned Kawabata who is a writer who has fascinated me over many many years and I also love Tanazaki. That's, as they say, for starters. I also love reading the work of young writers I first met in classrooms such as ZZ Packer, Sarah Sun-Lien Bynum, Courtrny Angela Brkic. Really, there are too many to name and so questions like this always end up feeling poorly answered because of who is left out.

SR: I once read that you were in a gang, a word that carries certain connotations nowadays. How would you differentiate the gang you were involved with to modern gangs?

SD: A gang? That came up in an interview in the Missouri Review. Gangs are mentioned in a few of my stories but I am afraid when it comes up that people think I am writing some kind of literary rap whereas what I am interested in is that notion of males ganging up ala say Lord of the Flies. The gangs we should be wary of have names not like Hells Angels or Latin Lords, but Fundamentalists of all stripes, NeoCons, the Fox New Fascists, those are the gangs that scare the shit out of me.

SR: Originally, you attended Loyola University Chicago to become a doctor. Was there a defining moment that spurred your drastic switch to English literature?

SD: It was a big personal drama at the time way back when I was 18 to make the switch from premed to being an English major and damning myself, as my immigrant household worried, to a life of poverty and ruin. I try to keep that in mind when I encounter students for whom that isn't comic, but a real conflict for them coming as they do from households, often immigrant households, that so desire to participate in the American Dream.

SR: You currently teach at Northwestern University. Why do you teach? What lessons do you hope to bestow on your students?

SD: I try and teach classes that are about the special kind of thinking that the writing arts are about, that is thinking through manipulation of tools, of craft-narrative thinking, lyrical thinking. They already are so full up with critical thinking they need a break from that to let this other kind of thinking take hold, and then, at that point, they can begin to integrate all the different ways that human being think.