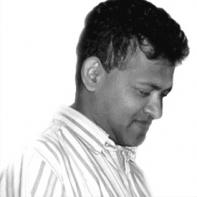 Sankar Roy, originally from India, is a poet, translator, activist and multimedia artist living near Pittsburgh, PA. He is a winner of PEN USA Emerging Voices, a Rosenthal Fellow, a finalist for Benjamin Franklin Award, winner of Skipping Stone Award, a finalist for University of Arkansas Open Book Competition and three-times semi-finalist for Crab Orchard Review Competition, author of three chapbooks of poetry- Moon Country, The House My Father Could Not Build and Mantra of the Born-free (all from Pudding House, 2006, 2007). Sankar's poems have appeared or forthcoming in over sixty literary journals and ten national anthologies.

Mirza is not dead. He is just pretending!

Finally he found something in common with
the ruler-each are lying in a private sarcophagus.
The difference is emperor's is worn and broken.

But Mirza's is light, bright and uniquely contemporary!

It is a brand new sarcophagus, never lived in.
In fact, Mirza is not even asleep. He is just pretending.
I saw him wink at us as we passed him,
saw him nodding to another fellow-dead.
He seemed very satisfied there. Adjusted & Secure.
Our tour guide opines,

Mirza had been always a prank. Let us go da udder way.

Palaces are Cheaper in Dreams

Last night Mirza bought a wind mahal
for three rupees and ninety-five paisa. It was so huge
that he could not finish enjoying it in one night's dream.
Mirza remembers the palace's garden
was full of exotic orchids and many varieties of gul,
fountains springing up here and there,
a sprawling porch in the middle
cooled by mist-making machines.
There was also a temple, integrated into the outer wing
of the palace where a sarosh
was standing on a lotus-shaped altar.
As soon as Mirza went in,
she put him under some kind of spell.

He felt very spiritual. His brain was seized
with a craving to give up everything that he had.
Mirza had no idea how long he was there.
When he woke up, he was empty-handed.
Tonight, when Mirza gets back there, he will check out
other areas of the palace where, he thinks,
there are alleyways in which precious gauhars are scattered
like gravel and beautiful princesses, khubans
wait for him in petal-strewn tubs.

It just doesn't get any better!

Booming in her tightly held body,
a nazzaara-e-jamaal flashes another glance at him.
But Mirza, a famous man now, talks about bugs
and other hazards of traveling around the world.
He bemoans the loss of a suitcase
in Pakistan as his listeners, a bunch of literary sycophants
say wah wahs to emphasize

and a pretentious Mirza lists the names of preservatives
one must add in his diet to keep it from being spoiled
while in a foreign country, how the inclusion of some contraband,
jelly shots, punch, candy and some undomesticated beer
can turn a boring literary event into a night of joy,
why he didn't actually give his mother a sandesa cake for her birthday
and why every author should do himself a favor
by shipping his books in advance

and then he jumps on his feet to grab the door
closing behind the woman disappearing
and runs through the hallway before she goes out
through the final door which is always propped open
and throws himself down to her knees and confesses,
You are the hottest thing I have seen in the aalam!

Mirza always finds a way to get to you. Those of you
quiet in your tomb or on a bed, assuming that the house
where you live shields you, protects you, should take your cue

from the footstep of a mouse, from the whistle that just blew.
Mirza cannot be silent and he never leaves you. Mirza's soz
always finds another channel to haunt you. And you

ducking with your head under a pillow always knew
Mirza's nawa screamed in your brain, a blood louse
that never lets you rest. Nothing can shield you. You flew

into another aalam, beyond sound, hoping you were through
with Mirza's jamaal. Though you rest bekharosh,
even his 'azaab finds a way to reach you. Those of you

voiceless, silent in your snooze-all of you once knew
how dreams explode, visions return in the throb of his hawa.
Mirza always finds a way to reach you. And those of you

who sleepwalk toward your own firdaus
must rest before Mirza returns to whisper in your gosh,
adorn your janaja like a skilled gul farosh. Mirza will get to you.

Simply nothing can shield you. Nothing can protect you.