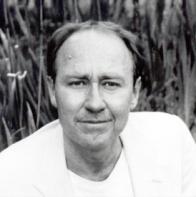 Mark Irwin is the author of six collections of poetry; the last three include White City (BOA, 2000), Bright Hunger (BOA, 2004), and Tall If (New Issues, 2008). Recognition for his work includes four Pushcart Prizes, and fellowships from the Fulbright, Lilly, NEA, and Wurlitzer Foundations. He teaches in the Graduate Creative Writing Program at the University of Southern California.

There must have been ten or twelve of us standing around you, and the surrogate father, the curator, famous now. For the most part you were all there, with the notable exception of right femur, left tibia, and part of the skull. No hands or feet. I guess they were shattered and lost in your swim to the surface of three million years, yet in that nest of ribs I knew a heart once drummed. Next to me a pregnant woman was looking down to where one pelvic bone and the sacrum stood, and for a moment she, a complete stranger, touched my shoulder, as we both gazed down farther into a white fire, one of laughter, sorrow, blood, then she said to me or the air, “I need to go home.”

is what they named it, knowing it might
hit a homerun, which for some was the 10.4 megaton yield
obliterating the island of Elugelab, on the Enwetok atoll, as it
momentarily assembled every known element, like the conflagration of a star,
except that its neutron density was millions of times greater,
as the fireball, vaporizing birds and scorching fish, began to rise, expanding
into a cloud that eventually spread
into the stratosphere. “Out of the park,” some said
on November 1st, 1952. Mike, Mickey, Miguel,
Mihail, Michael. Imagine.

Then I saw them blowing air into each others'
mouths, their bodies clasped together.
They did this at night while lying down,
then they would float through the house
during the days, seasons, years, as their
children grew and moved away.

It works like this: because we are born,
wriggling in shade, we eat with our eyes closed,
then crawl toward the ceiling and hang by a thread
as the houses sway in the dark.
We learn at the last minute to fly, to keep
their enormous weights from crushing our bodies.

‹ "The Panacea" by Luisa Villani up Two poems by Peter Shippy ›