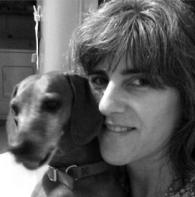 Katherine Tanney has written several essays about love, loss, and living with dogs for "Modern Love," in the New York Times, and her nonfiction recently appeared in Dirty Words: A Literary Encyclopedia of Sex. She writes the column, "Please Don't Feed The Writers," for the Austin American-Statesman and is a freelance journalist and blogger. Her latest project is Stricken: The 5000 Stages of Grief, an anthology of essays she co-edited, to be published in 2009.

The man and woman at my door were probably in their early sixties. Behind them at the curb was a Texas-size pickup — this is an expression I've heard on television commercials; it apparently means big for the sake of bigness — hitched to an even bigger trailer that blocked my view of the street, the trees, the sky.

“We're Cheryl's parents,” the woman said, with a slight head toss toward the house next door. The man stood off to the side, nodding. He was long and thin, with attractive white hair.

“We're evacuees.” She waited. “From the storm?”

Once recognition appeared on my face, she explained that they couldn't park in front of Cheryl's because of the limb hanging way out into the street from the thirty-five-year-old Ash. My vacant stretch of curb, however, was a suitable solution from which they could still reach their power line to Cheryl's, assuming I was okay with it.

Before I answered the door I was on the phone for an hour, maybe longer, with a man from a giant online health insurance brokerage, with whom I'd been sharing intimate details of my mental and physical history. I managed not to lose my cool as he read through an encyclopedic list of grave and not so grave conditions I needed to cop to if I was now or had ever been so afflicted. I promised him I did not smoke. I gave him access to the numbers of my checking account.

I already had health insurance. I was applying for a new policy with my same insurer because the online brokerage magically came up with a significantly lower quote than my annual renewal letter. I was, in short, attempting to pull one over on the system.

A word here about telephone reps in general, and about the specific individual who assisted me. I don't honestly know what's worse: being trapped in a hermetically sealed maze of automated touchtone options, where each button pressed leads to a brand new menu ad infinitum, or being connected to a live human so minimally trained, so tethered to a script, and so closely monitored that s/he appears to be either an automaton or terrified of making a mistake. My guy was the latter.

But getting back to the people at my front door. I didn't know my neighbor's name until her parents showed up that autumn day. Her houseful of temporary and permanent residents-a collection of heavily pierced, tattooed, and strangely coiffed adults, children and teens — were given to foul language, screaming fits and outdoor meetings at all hours. In the two years since Cheryl moved in, there had been a growing number of progressively dented, screeching and nonworking automobiles in her driveway. The precariously poised tree limb was the latest annoyance. It was only a matter of time until it snapped off and, if it didn't injure someone, halted traffic on the street.

“My housemate parks out front,” I told the people who raised Cheryl, “and my guests.”

I was sweating. It is assumed that people forced to flee their homes by hurricanes deserve the charity of everyone they meet. It is or once was a given that all of us adhere to the golden rule, that doing good unto others not only makes us feel good but brings reciprocal acts of consideration our way.

“How long do you want to leave your vehicles there?” I said, nonplussed.

They looked at me as though I was a moron. “Until it's safe to go home,” the woman said. Her implication was clear: it could be days, maybe weeks.

“You're welcome to park there for today,” I said. And away they wandered in silent disgust.

Confession: My housemate was scheduled to begin a house sitting gig the day Cheryl's parents showed up. He planned to come home after work, pack up his car, and take off for the next two-and-a-half weeks. Both of us were looking forward to a spell of complete privacy before beginning our third year under the same roof.
I intended to grieve and rage in blessed solitude. My boyfriend, Julian, who had been a friend for a couple of years before we became involved and was someone I trusted and admired, had devastated me by going behind my back and brokering a reconciliation with his previous girlfriend. The many weeks during which they schemed and dreamed he kept me in the dark, acted as though things were hunky dory between us.

When pressed to explain his lying, he said only, “I messed up. Sorry.”

Lately, Julian had been appealing for forgiveness. Things fell apart pretty quickly with the old ex and he was lobbying me for a speedy return to friendship. I was, judging from his e-mails, supposed to feel sorry for him.

Five minutes after the evacuees left my front porch, I heard the buzz of a chainsaw. Five more minutes and the tree limb had been cut off by one of the house's residents and room made at the curb for Cheryl's parents' rig. Her father began hooking up his power line. For the next four days, the man and woman lived at the curb with their trailer doors open. They watched TV, walked their two dogs, visited with their grandchildren. I was deeply relieved I hadn't buckled to an ingrained sense of responsibility for them, that another solution, a better one by far, had been found to letting them practically camp in my front yard.

The same day they came to my door, I was interviewed by telephone by someone at my insurance company who quickly approved me for a new healthcare policy. In the end I saved six hundred dollars.

The last time I stood at Cheryl's front door to see what could be done about her dogs — they had become tireless, all-day barkers — I found her face so difficult to look at that I decided never to return. Her pasty skin was riddled with crusty, infected looking piercings. Her shaved eyebrows were reappearing as black stubble. And the vacant holes in her “modern primitive” earlobes were big enough to pass eggs through.

It isn't that I've lost the ability to feel compassion. I think it's that I've become deeply suspicious, as though life requires a constant state of heightened self-defense. It isn't that I won't help out — I've been paying particular kindness lately to the alarming number of friends receiving diagnoses of cancer. Rather, it's a dawning awareness of a disturbing trend, one that starts at the top and trickles down. “I've got mine and that's all I care about!” we collectively cheer as we go about our business, knowing that somewhere, somehow, there is somebody who will do the right thing like a complete and total sucker.

‹ Nonfiction up "Love in a Handbag" by Mimi Schwartz ›