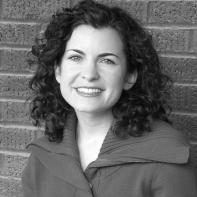 When one season is at the brink
of spilling over, you recall
the way you walked,
ankle-high in yellow leaves,
a year ago, or maybe two-

it could have been two
months for all the lapse, except
the light, its bright tone
of between: the vibration
that gathers, before winter's coma.
A kaleidoscope of Novembers,

where did you hear that time
is a thing like a crystal, the way
the facets are the same
when it fractures
into something smaller?

Confirmation class. You see the vine
and leaf pattern around the altar,
the day green, for epiphany.

Lichen and helicon moth, sun caught
in descent. Teach us to number
our days, the reverend had said — a hope
that something is saved
in the contemplation,

even if you wake
one morning to recall
the voice of wind in this burnt-out
gully, branches black, arterial,
leaves fallen deep
on the path over the ridge.

Not that I am the type to move in,
steal them away. Still, I can see why some women do,
crossing legs on a bar stool, brightening
like the corner house that leaves
all their lights on: everyone knows

their kitchen walls are blue.
A flash of teeth or eyes that says
pay attention. All of us must hide
such hunger somewhere. Or,
if we are certain he loves her, the thrill

that he finds us interesting,
not for what we might offer in the end:
his question about my childhood trip to Russia
genuine, that hand he lifts to his glasses,
rubs around his neck, not affect but pure gesture.

I would like to believe this, as I crush
the lime over my glass, not trying to sparkle but not
not.
This story about the car
he rebuilt in high school —

but people are all affect, I think
and then must wait for sense
to catch up with his sound,
so I can deliver the awaited response,
with some extra show to compensate.

The way the young men at church,
newly married, avoid me or make
great show of wedding bands, why, at a potluck,
one whose wife is gone to her sister's in Tucson,
when I sit beside him, becomes deeply

fascinated by his pecan pie.
Some puritanical sensibility that sees an impure thought
far down the road and crosses to the opposite sidewalk —
even if that thought in the end is nothing
but a trick of sunlight.

There was a time, if we believe the stories,
when men and women didn't know their nakedness.

The afternoon in that shared kitchen
when I asked Sarah's husband about Amarene:
cherries soaked in syrup and brandy from the Friday market

and he crossed the room, holding the little clay jar,
unlidded it and lifted one cherry on a spoon,
the red syrup pooling the spoon's bowl,
and I opened my mouth to take
the bright fruit, closed my lips over the spoon,

only a moment, until a rat moved against a drain pipe
or I lifted a finger to wipe the syrup from my lip,
and we both saw how
close we stood, and he
turned quickly setting

the jar aside, to scour at
the coffee staining
the sink.

When pilgrims arrive on bicycles, the lime
avenue is bare as an open palm, and clouds untwine
their wool, pale against a pale sky.
This man and woman, leaning
their bicycles beside the church, beside
the yew tree and St. Margaret's Well, the way
a thousand handprints darken stone, layer on layer:
the blind woman in 1265, who drew water
here and drank from the chalice of her own hands
until light poured in clear through the trees, a miller
who once watered the cow that lived
to the age of sixty-four and never stopped
giving milk. All the lame and dying,
who crouched or knelt

beside this same opening of earth. Rain begins now,
water on wood, on stone and bicycles.
The man pauses to watch droplets catch
in the faded grooves of a headstone
and wonders if miracles occur
only because we believe them into being.

"Such an ordinary well," the woman says, and he
agrees. But there is something about the persistence
of belief, even when myth has become
only myth. The water, in any case, is sweet.

They depart as they came, stitching down the avenue
in measured strokes, until from the churchyard
they appear in miniature against a sky
the color of bone, so small they could be sheep,
or stones in a field, mulberry trees to cut the wind.