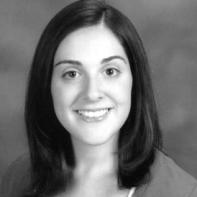 Rachel Marie Patterson completed her undergraduate degrees in Comparative Literature and Spanish at the Pennsylvania State University in May, 2008. She now lives in Greensboro, North Carolina, and attends the MFA program at UNC Greensboro.

Today, my father calls me from PA, and I want to tell him about the palm trees and the lampshades with pressed flowers in them and how here you can write with your toes in the water in the middle of January, but all he wants to talk about is how he cleaned out the freezer, listing each item he plucked, its estimated age, and whether he ate it or not: the two-year-old steak he overcooked with mushrooms; the three-year-old Hebrew Nationals, shrunken to half their original diameter, that he boiled for 15 minutes to make sure everything was dead; the salmon he took one whiff of and dropped in the garbage. He reports "diarrhea all afternoon" and reflects on which must have caused it. But he's proud of himself, he's so proud of himself, and I think about how lonely he must be, knees on the linoleum, all by himself in the house we grew up in, eating or wasting the food we meant to eat together, and I think about all the things I want to tell him and all the things I never tell him, and how I wouldn't stay home for more than a week at the holidays because he wouldn't let me bring my cat, and I think of what a stupid reason that was, and I think of his organized stack of bills in the basement and his hundred silk ties hanging upstairs and his Old Spice and his Brylcreme and how he used to pick me up from school in his pressed suit and I was so proud that he was my dad, and how he took us to the Sizzler on Monday nights and we could order soda, and how we weren't allowed to watch TV on schooldays, and how he saves the directions for everything he buys, and how he knows the difference between butterscotch and caramel, and how he always tucks in his shirts, even when it looks stupid, and he always makes my brother tuck in his shirts, even when it looks stupid, and how he cried when he dropped me off at college, how he still cries when I come home to visit and he hugs me and makes a noise with his mouth, how that mouth is on the other end of the phone now, how carefully he reports each detail of his day, and how we never say what we mean, how we hang up without saying it, and we might never say it, and how afraid I am that he will die someday, every day, how afraid I am of that.