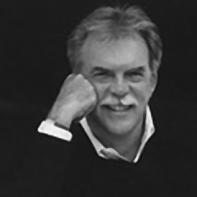 Kevin Clark's book of poems In the Evening of No Warning earned a grant from the Academy of American Poets, and his poetry has appeared widely in such journals as The Georgia Review, Antioch Review, Crazyhorse, Gulf Coast, and Black Warrior Review. Clark's criticism has appeared in many venues, including The Iowa Review, Papers on Language and Literature, and Contemporary Literary Criticism. Clark teaches American literature and creative writing at Cal Poly in San Luis Obispo, and during the summers he teaches at The Rainier Writing Workshop, a low-residency MFA program in Tacoma.

How brilliant, how foul-mouthed, how later Burl's chest would open
when he came face-to-face
with the bartender boyfriend
of a girl dressed in tight red, and being too drunk to tell the kind of lies that free you
from the gut-check, instead

he heard the call
of his own fool blood and charged him like the fool he loved to be, despite
the big handgun
that was clearly open for business that very moment. The percussive call
of the gun would have stopped

a less driven man, yet Burl's face glowed wide open with the proud frontal myth
of family, all the lies
spun by his blitzed uncles in New Port Richey,
the red flag of his own blood
any fool could see was rippling in a drunken wind, that supplied all the lush lies

a bright and beat down clan
needs to open all the off-brand tallboys
they could, then sneer to face the call of failure: The boat horns of the damn Greeks,
that ball-splitting call
that meant time to head for work in the red gulf coast dawn of the sponge fishers,

nearly sleepless, the face of the captain hard in his face, shouting
slip the line, slip the line, you fool, now
open your eyes to the job!
Before his one quick college year ended, O What Sweet Lies he told us all
from the git-go, lies

that call into question even now our own myths. After dinner, the stereo would open
with the White Album,
and his road-tripped beer-red mug was soon sticking in the door,
a fool on a mission
to make fools of each pinched and needy face he loved and hated, each

good-boy face facing him for more, and the late-night storied lies keeping us
from our pitiful freshman explications
until Ira the fool RA
would call in sleepy anger as he sloughed down the hall to our room,
the florid red head of his dick

nubbed out the open slit of his boxers. We couldn't wait, because we knew
what was coming: Dickface!, Burl would call,
and the last laughs rose like lies.
Later, we heard he charged until the fool red puddle finally sucked him down,
that he lay there, dead, grinning at the joke.

Bearded and lithe, with a voice like a screech owl on acid,
our weekly hippie wise-ass, Bruce
played short to my first, a decent glove with a wit that played us
into laughing at our lame
Texas Leaguers and bad throws. Even our great lyric drives
into the gap, self-mythologized
after a second beer, would so often earn their rightful place

below the team's pantheon of good hits when Bruce would nod
your way, then describe for the table
how you just knew the right fielder would take two steps left
as the ball curled ten steps right,
how the guy in center would surely step on the sprinkler head
and go flying as your slicing can of corn
fell just out of his reach to bounce high in melodramatic parabolas

to the cyclone fence, how in unrivaled hustle you'd pulled by God
into second, out of breath
amid the wifely cheers, Bruce's thin versifying hands lilting now
in accompaniment, the guys spitting
foam back over their vegetarian pizzas, your own hopeless,
breathless guffaw bending your head
to the plate because Bruce was right of course, your long blast

was an adventure in what you once believed was good karma,
your knees gone frail
from too many games, and whoever slides headfirst into third
on a prayer anymore?
And you laughed up the last forgotten atoms of old dope because,
even as he hid his cancer,
Bruce was a fatalist, a swift comic mirror reflecting your own

grizzled face back at you, and for a few weightless seconds
all your secrets were public
and celebrated, as if we were safe in our own lives, each of us
granted absolution as we took the comic cut,
because we knew not only was he always there in the gunmetal haze
of the valley's dawn fog
to pull your beat-up Nova out of the mud runnel you'd sank it in,

not only was he always there to sit all day at home in unlikely calm
like a decaffeinated uncle
with your fretting youngest as you sped your overdue, over-swollen wife
to the maternity hospital for the C-section?
No, but because he'd kicked a one-hop gift in the second, and another
in the fourth. Half the night
he'd worn concrete hands. After the irreal haze of the game's late stanzas,

after the last slice was sucked down, we gladly took the cut because
Alan or Rick or Ray would say,
you know what turned the game around, don't you? We'd played
the first six in a dead sleep
when their clean-up tore a savage grounder through the middle.
It was then Bruce went airborne,
stretched full length, then knocked the ball down in midair,

only one run in, the guys all juiced up, and ready to play.
The waitress is throwing chairs
on table tops. His voice no longer scrapes the fraternal air. Joel says
it's about that time.
No one moves. Bruce wasn't the best hitter, hardly the best glove man
I'd ever known. We believed
we'd won because he'd laid himself out, but now that he's gone,

the narratives sentimentalize. Years scheme and pass. The day
of his memorial I was vacationing
back east, but most of the team made it. A few spoke. Ray read
a few words for me. Since then
I've tried to rewrite the eulogy, make it say something about Bruce
knowing such high-wire glory had to end.
Fact is, almost all of us left town, Alan found new guys to fill in,

they faded. All I can say is this: Bruce didn't buy karma, or luck.
Were he here tonight, over pizza,
his first raspy hint of smile tilting us all toward that indicting
beery glee, he'd tell us what
we'd only hear from him: Heaven's a big blank, not even a cloudy floor
with harp music. Truth is, he would say,
I'm very dead. You're not. Next game's Wednesday night.