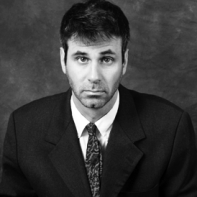 Steve Almond is the author of two story collections, My Life in Heavy Metal and The Evil B.B. Chow, the novel Which Brings Me to You (with Julianna Baggott), and the non-fiction book Candyfreak. His new book is a collection of essays, (Not That You Asked). He lives outside Boston with his wife and daughter Josephine, who can now make the noises of seven different farm animals.

Fiction editor Rebekah Richgels provides an interview with author Steve Almond. She says of the experience, "I knew I wanted to interview Steve Almond about two chapters into his book Candyfreak. Not only is the subject matter—the rise of candy conglomerates and destruction of unique confections through the death of mom-and-pop stores—fascinating, but Mr. Almond has a unique way with words that caused me to laugh out loud as I read. He made the subject amusing and interesting, as well as making it more than just a book about candy. He discussed how it factored into all aspects of his life and how the chronicled experience changed him. His literary ability and uncanny wit was fun to read."

Superstion Review: You mentioned in one of your previous interviews that people are usually taken aback by the sexual content in your first published collection of short stories. Is sexuality a common thread in all your writing, or did that collection just turn out that way? How important do you think it is to write about sexuality? Is that a natural tendency of your writing or do you make a conscious effort to include things of a sexual nature?

SR: In Candyfreak you originally set out to discover the world of confection sweets and ended up discovering a lot about yourself. What made you put that in the book?

SA: Yeah, I suppose I could have just written a book about the sweets industry, but that would be ignoring my own pathological addiction to candy, the way I used it as a kind of anti-depressant, which struck me as a central part of the story. I didn't just want to write about candy. I wanted to write about candy as a way that we find to find pleasure and relieve our sorrow. Again, that's just more interesting to me.

SR: You mentioned that your parents are psychoanalysts. How much of an impact did that have on you growing up and how much, if at all, do you think that impacts you as a writer or your writing?

SA: Psychoanalysts are interested in people's internal lives, the coaxing people into dealing with the unbearable feelings inside themselves. That's a big part of what writers do as well. We might use fictional proxies, but we're aiming for the same radical self-revelation. My parents are also cool, smart, morally-grounded people who read and think and feel a lot. I'm lucky.

SR: Which authors have impacted your personal writing style most? How has your style changed through the years?

SA: It's a long list. Vonnegut, of course, who convinced me that writing could be both sad and funny. Bellow in college, the electricity of his prose. Toni Morrison, Jane Austen, E.M. Forster—all writers who just blow me away. As a grad student, I was interested in writers—like Barry Hannah and Denis Johnson—who expanded my sense of possibility as a writer, the out-of-control whack jobs, the “mad ones" as Kesey would say. As for my style, I don't really believe in “style" per se. I think you just find ways to tell the truth, and that shapes how you treat language.

SR: You've written many short stories, poetry, fiction, and non-fiction. Does it take a great deal of flexibility to move from one genre to another? Which is your favorite?

SA: Flexibility is one way of putting it. Impatience and/or desperation might be another way. I don't have a favorite genre, though I think, if I was left to my own devices (that is, I didn't have to worry about making money) I'd still be writing short stories.

SR: You consider yourself an artist. What does that mean to you? What do you think an artist's role is?

SA: Holy moly. How many words do I get here? The bottom line is that artists create stuff whose central (though not only) purpose is to describe what it's like to be human and, in so doing, awaken feeling in their fellow travelers. They're not selling anything, in other words. That's my version of the disease anyway.

SR: It can be difficult to convey humor or sarcasm in printed word, yet there are many humorous and unique turns of phrase in your work. How difficult is it to get your writing to read with the tone you want?

SA: It depends on the piece. Sometimes, when things are going well, the language does what I want it to do. Most of the time, it's a struggle. You overdo certain things, underdo others, fake it in various ways, seek attention, and lose sight of your characters. There are so many ways to screw up.

SR: Is there one of your characters that has stuck with you? Why? What gave that character such staying power for you?

SA: I love Larson, the failed novelist from “Larson's Novel." He's the only way I've been able to justify my own failure to write a decent novel.

SR: What sort of repercussions or reactions to your writing were there that you didn't expect, and did the impact of them carry over to other things you wrote?

SA: I tend to get a lot of incredibly angry, violent emails when I write Op-Eds for the Boston Globe. The notes come from the same Americans who spent most of October yelling that Barack Obama should be killed. My response has been to write other pieces about these extreme reactions. There's a whole bunch of citizens who are extremely angry and potentially violent. And they're emboldened when the rest of us remain silent in the face of their pathologies.

SR: You've said of Vonnegut's work that, "Sixteen year-old kids… find those books and are suddenly much more human because of them." You've also credited him as one of your all-time favorite authors. Does the impact of his work on others affect the goals of your writing?

SA: I'm not sure what you mean, exactly, but I'll say that most writers are jealous readers in the end. I'd certainly like to have the same kind of impact on readers that Vonnegut does, to make them more compassionate, though my work is pretty puny next to his.

SR: You co-wrote your novel, Which Brings Me to You, with author Julianna Baggott. Talk about that experience a bit. Was it what you expected? Who approached whom? How did you work as a team?

SA: Julianna approached me and we had a great time writing the first draft, mostly showing off for each other. The second draft was tougher, because we started using our characters to launch criticisms of each other. In the end, though, the fighting was good for the book. Co-authors being at each other's throats, it turns out, is a good source of narrative tension.

SR: What is one piece of writing-related advice you received that has really affected your career?

SA: I remember the writer David Long coming to visit my graduate program and looking at one of my stories and just kind of saying to me, “Are you ever going to take your characters more seriously?" It was like he was challenging me. And of course he was dead on.

SR: When you introduce yourself at parties and such and tell people you're a writer, what kinds of reactions do you get?

SA: I don't do a lot of parties, and when I do it's mostly just a bunch of other writers. So we sit around and complain. But when I tell someone at a bar, they often say, “Yeah, I've got a great story you should write." Or sometimes they'll say, “Yeah, I've always thought about writing a novel. I'll probably do that at some point."

SR: Why do you feel it's so important to speak out about politics?

SA: I don't feel it's important to speak out about politics. It's important to speak out about morality. And that's important because I don't want the species to perish, and I don't want our future to be full of misery and violence. I've got kids now, and I want them to live in a world that's safe, to have the same miraculous opportunities that I've had. That won't happen if everybody just keeps buying junk and pretending we can live the way we do now. Because we can't. We're going to have to learn how to live with less, and share more, and stop pretending that Human Suffering is just another channel on our cable package.

SR: What direction do you hope your future works will take, and what are you doing to facilitate that movement?

SA: I'd like to get back to fiction, and specifically to work on another novel. That's going to take some doing, because I've got two little kids at home and financial responsibilities. But you can't use that stuff as an excuse forever. So I'm hoping I'll be able to discipline myself in the next few years—though it may have to wait until my kiddos are out of diapers.